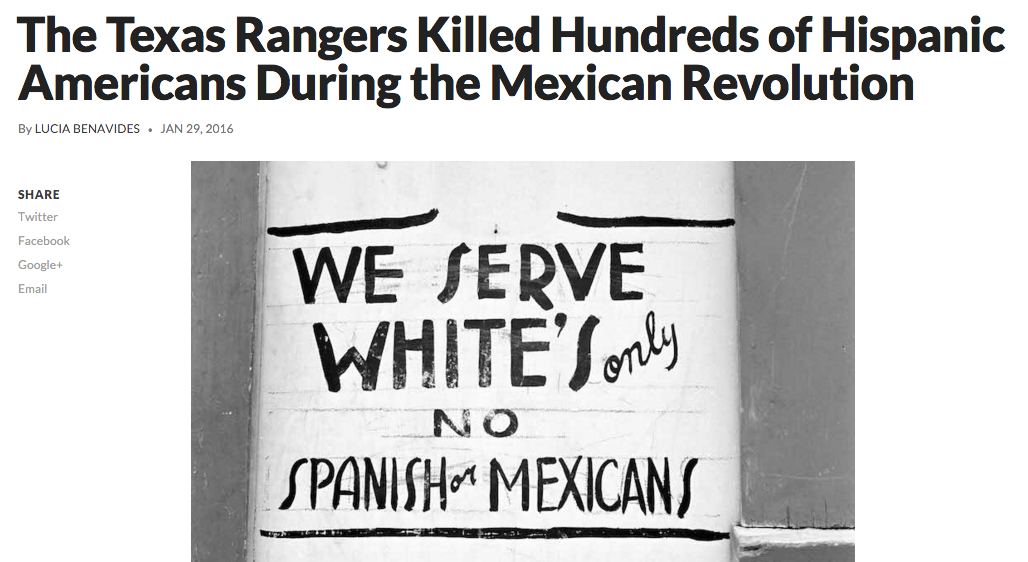 The exhibit at the Bullock Texas State History Museum in Austin, Life and Death on the Border 1910-1920 is making news because it’s allegedly the first time the state has admitted in public that the Texas Rangers methodically, officially, killed Mexicans.

What I say to journalists and writers covering this exhibit and history: don’t do it. You owe it to yourselves as a professionals and to your readership as Texans and Americans to get this right.

The Texas Rangers methodically hunted down and murdered Mexicans specifically for economic and racist reasons — this had nothing to do with the PC verbiage we use today to describe folks of so-called “Latin” descent (e.g., Hispanic and Latino).

As POCHO’s Texas Burro Jefe, Eres Nerd, recently noted, “Why would Hispanics and Latinos go back in time simply to be murdered by the Texas Rangers?”

It might be news to some that “lawmen” sanctioned by the powers-that-be in Texas went around capriciously murdering Mexicans, but to those of us who are students of our own history, we’ve known for a long time. 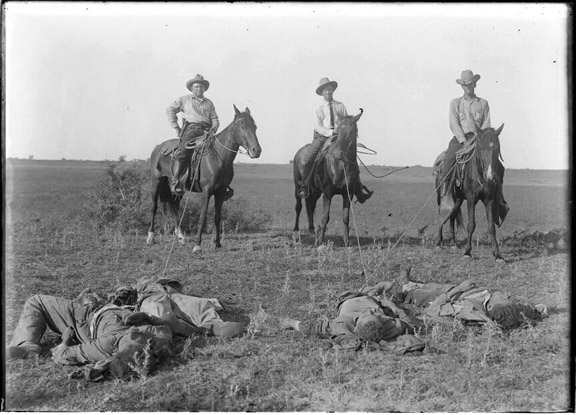 We’ve read With A Pistol in His Hand and seen the movie (featuring — who else — Edward James Olmos) The Ballad of Gregorio Cortez and we know through family histories or rumors from our hometowns that the Texas Rangers used to kill Mexicans.

We’ve seen the postcards, the old-time photographs, of men on horseback proudly lording over dead Mexican bodies with smiles on their faces.

We’ve consulted each other after history classes, appalled, wondering how such a thing could happen in a state where everyone seems to love Mexican food so much.

We’ve wondered what it would have been like if it had happened to us.

The truth is, a big chunk of the “Hispanic” population of Texas has been here much longer than their white counterparts. And so our truth — that the Texas Rangers were a rampant, anti-Mexican killing machine gunning for Mexicans and their land for decades as part of an official capitalistic grab for resources here — is not a revelation.

Let’s be honest: there were no Cubans and Puerto Ricans getting gunned down by Texas Rangers. Mexicans, on the other hand, were killed in the hundreds or thousands.

So for the sake of honesty, accuracy, and to ensure that history does not repeat itself, I entreat you (journalists, bloggers, readers, Texans, Americans, Hispanics, Mexican-Americans and Chicanos): do NOT sanitize history with semantics. Be honest.

You owe that to yourself, to each other, and especially to your readers.