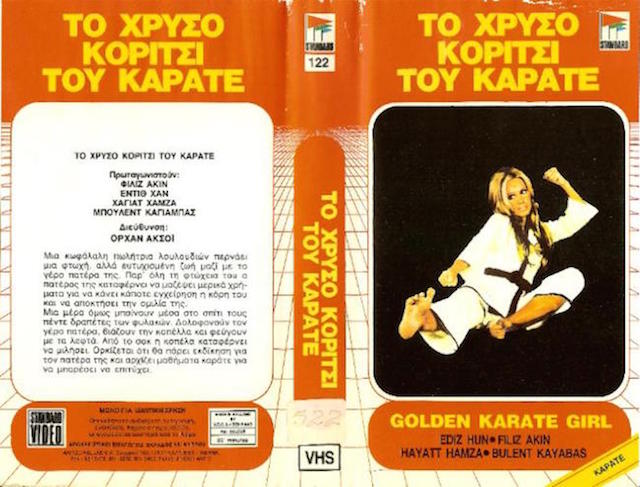 Now that poor Turkey, the sick man of Europe, is under the control of an egomaniacal historically ignorant Ottoman wannabe, it’s comforting to look back on the glory days of Turkish cinema with 1974’s Karate Girl.

We love Karate Girl’s film making genius since we discovered this excerpt — the “best death scene ever”:

What exactly is the flick about, you ask?

Back Yard Asia has the answer:

Filiz Akin plays a flower selling mute girl who lives with her dad. One day her dad is murdered by scumbags. She hooks up with a sensei who teaches her karate after which she sets out to take revenge. Wild action ensues. KARATE GIRL is a highly entertaining movie and fortunately it’s one of the (too few) Turkish films that were granted an English friendly release. In fact, the English dubbed version is released on video tape in Denmark, Sweden, Norway, Greece, and possibly other places as well. If I remember correctly there’s also a French dubbed tape. It’s never been released on DVD and the video tapes are now hard to come by but at least you have the possibility of getting a dvd-r from a friend. The original Turkish language version is also released subtitled on VHS in Greece (with a Greek title in Greek letters and the Turkish title printed on the cover). I would assume a domestic Turkish tape exists as well and maybe even one made for the huge Turkish market in Germany. The dubbed version has different music. The original version was posted in full on YouTube but has been removed because of a copyrights claim (not for the film but actually for the music. I doubt the Turkish film company paid for the music anyway).