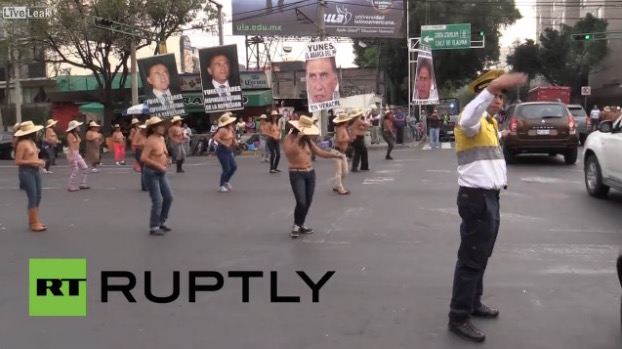 We can’t publish this video because NSFW but we can link to it. Hundreds of members of the 400 Pueblos movement protested Monday in front of the National Action Party (PAN) headquarters in Mexico City, many of them topless. Semi-nude protests — by men and women — have been a tactic of the group for over a decade.

Twice a year since 1992, The Villagers from the State of Veracruz who comprise the “400 Pueblos Movement” have been coming to Mexico City to protest what they believe was an unfair land grab by the government, seizing public lands they had been living and working on for over a decade.

Camping out in temporary tents that surround the nearby Monumento a la Madre for upwards of two or three months at a time, the protestors take to the streets twice a day for two hour long protests to make their cause heard. But It didn’t seem the government was hearing them so, in 2002, they decided to start protesting naked. Now, twice a day at noon and during the evening rush hour the farmers of the “400 Pueblos” organization demonstrate on the main Paseo de la Reforma, a grand boulevard in downtown Mexico City.