“Latinos can go “blank” themselves!”

This is what Kennedy Center director Michael Kaiser must have been thinking when he screamed, “Go F___ yourself!” into the telephone when confronted by Felix Sanchez, director of the National Hispanic Foundation for the Arts (NHFA) on the continuing Latino Lockout at the Kennedy Center honors.

Since its 1978 founding, the Kennedy Center has only honored Latin@s Chita Rivera and Placido Domingo. I spoke to Sanchez about this disturbing incident, and the even more disturbing third-of-a-century-long diss against Latino artists in the United States. 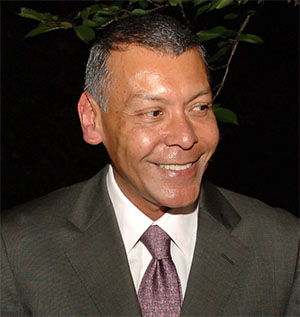 LA:  Felix, first of all I want to applaud you for revealing the media what Kaiser said to you on the telephone. Most people would defer and not speak up about a private and embarrassing (to Kaiser) conversation. Can you briefly re-tell what happened?

For two years we’ve been trying to reach the Kennedy Center chair, president, producer, and even Caroline Kennedy. We’ve sent letters,  emails, phone calls and we’ve gotten ZERO response. We were able to talk to the assistant to Kaiser. This is the buffer they set up between us and the administration of the Kennedy Center. They refused to meet with us, saying they cannot meet with anyone lobbying for individuals to receive the honor. They have been fighting anyone who wants to get to the truth of the matter. They have no interest in resolving or cooperating this issue. So on September 12th they announced the 2012 honorees.

LA: Even Led Zeppelin has been honored this year! This is a choice that many longhaired Chicano rockers and stoners from Texas to Califas would bang their heads in approval, but it only proves one thing: even the British are ahead in line of U.S. Latinos, right?

Yes, even the last remaining members of Led Zeppelin, a British rock group, can be honored before Latinos. And lesser-known musicians, like Buddy Knight. Look, there’s a formula for the Kennedy Center TV show. Each year there’s one black person. Every few years there’s an Asian. Then a dancer or opera singer. And a major actor or comedian. So that’s the formula: black, white, occasionally Asian.

LA: Is this is a stated formula?

NO. In 35 years shows been going on, different chairman and directors have come and gone. The consistent producer is George Stevens (and now his son) who has been the co-writer and producer all these years. The producer gives you the vision of the show, and its the same creator and producer since 35 years ago. To make matters worse, he has been appointed co-chair of Obama’s Arts & Humanities Council!

Official Washington is present at each show. This formulaic year’s show tapes Dec. 2. The State Department hosts a Dec. 1 black-tie gala for the winners.

It is an approval of a “Separate But Equal” policy for the Kennedy Center Honors.

Here’s a very important way to get this: We get bigotry from the right. Like the stuff spewed by Jan Brewer. When we see it from the left, its just as harmful! These are bookends of bigotry. It’s infinitely harder to fight on the left. Art, news, entertainment, the bigotry of the left edits it out for us. And Latinos are excluded. This is what bigotry looks like. And nobody blinks.

LA: Have they apologized?

No.  Kaiser made a statement saying something like: “I regret the strong language. I was upset at being called a racist. etc.”

LA: Boo hoo, Michael. So you’re not worried about getting an apology?

No. What is indefensible is the exclusion of Latinos from the Kennedy Center Honors. The White House is complicit in this! The Kennedy name and legacy has always been tied to Latinos. RFK and Ethel Kennedy marched with Cesar Chavez and Dolores Huerta. Ted Kennedy on his deathbed spoke about immigrant rights. Caroline Kennedy has hosted the awards for nine years.

LA: Every abuelita has a picture of Kennedy somewhere in their casa. What a disconnect!

The Left sees us, but we are still invisible to them. We are kept on the periphery. We are unable to be seen in the mainstream. Both right and left Latinos get this issue.

LA: Isn’t the KC’s stated non-apology the same thing they’ve been saying all these years?

“We aren’t racist, we support Latinos in the arts in other countries, we have Emilio Estefan on the board.”

Their decision process is cloaked in secrecy, always same result, no accountability.

LA:  How can the structure of the KC board be changed? Is that the problem leading to institutional racism in this case?

What has to happen, is picking a new producer. Switch horses. One that has a vision for the country that is inclusive, reflects what we are today. There’s no way to redeem these producers whether they’ve won Emmys or not, Emmy awards are for the way it looks, not for the vision.

LA: Do you have any suggestions to Michael Kaiser for things to do to himself?

No. (laughs) I’d like the Kennedy Center to do this to itself: Implement institutional reform, remove the decision process from a small insular group, shine sunlight on decision making.

LA: The Kennedy Center is supported by corporate and private donations, how much do we the taxpayers pay?

According to the Los Angeles Times, we pay $37 million in Federal funding.

LA : Don’t get me wrong. I pride myself on being pro-immigrant. But if and when the Kennedy Center honors the next Latino artist,  their sympathy pick will most probably be a foreign-born Latino. The Kennedy Center must now be scrambling to search Wikipedia to see if Cervantes is still alive.

If you can have British rockers, and a Russian-born dancer why can’t you have a Latino? It seems that Latinos are only of value when they directly are from their country of origin.

LA: I suppose there are zero Latino artists and performers out there worthy of their honors. We must not be a very talented bunch.

Look at Rita Moreno! Last year was the 50-year anniversary of West Side Story.

LA: And she’s won every award in the book. I guess the Kennedy Center doesn’t want to burden her with yet another honor. Her shelves will creak!

This is pure isolationism in TV news, English language networks, it is segregation in the digital age.

THEY don’t know who we are. Totally misunderstanding who we are. For a third of a century they haven’t bothered to learn who we are. Thats what exclusion does.

Mexico should demand the Award be returned.

LA: Thank you Felix Sanchez for the interview, and for your activism.

You’re welcome. Let’s keep the heat on for a while longer.

Latinos are not asking to be represented. We have been doing that for 35 years.

Latinos are DEMANDING that the Kennedy Center realign itself to the true spirit of John F. Kennedy and all the Kennedy family legacy and recognize the greatness of American Latino artists and performers. Then maybe I will shout Viva Kennedy! again.