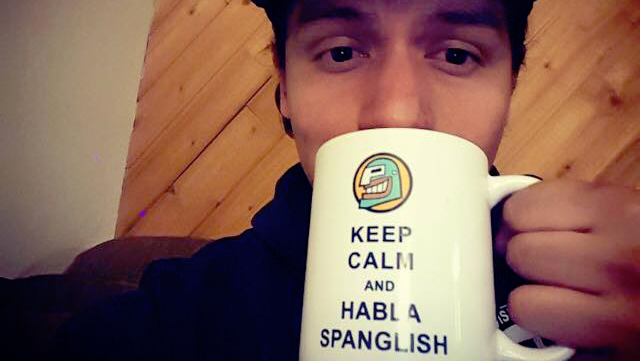 Spanglish is only one of the dialects created by people who straddle two culturas.

The underlying assumption of Spanglish is that one language is not enough to capture the full experience of being immersed in two cultures.

One the one hand, they are acculturating to the reality of American society and culture outside of the home while they live whole other existence and identity at home in Spanish. Not only are their identities tied to their use of language, sometimes even the names of the Spanglish speakers can change according to where they are. Emmanuel becomes Manny at school, which sounds more light hearted and American. Manny is a non-threatening guy with whom an Anglo American person can have a beer and make slightly racist jokes.

However, when a Spanglish speaker hears her mother say her entire name in Spanish, “Beatriz Alejandra Torres!” she knows she’s in trouble. But more than that, as a woman in a Latino culture, there are certain expectations that a Beatriz must live up to that a Betty would not have to deal with. Beatriz must be quiet and hardworking, must learn to clean and cook and take care of her siblings, and no matter what other goals she may have, staying a virgin until she’s married and having children after she’s married are her most important jobs. She lives in a dichotomy between being the Virgin Maria or being considered a puta. (Spanglish is used here because some words just sound punchier in Spanish).

Betty’s American identity pushes against that and strives to make her a more “liberated” woman. In her American identity she can have other goals and pre-marital sex and get an education. Many women like Beatriz do this when they live and grow up in the United States. However, this does not make the Latina women just like gringas.

Spanglish speakers are the people who are not all Latino and not all American, but a hybrid of the two. Many Spanglish speakers I know retain a lot of their parents’ culture while getting an education, starting their families later or not having children at all, and getting married or choosing not to get married. Their language strives to encapsulate their experience of being two selves and living in two societies. When Spanglish speakers speak to each other, it becomes a sharing of their hybrid cultures and realities.

While Spanglish is mostly a spoken language or dialect, when it is written, it can take the form of Spanish peppered with English words or phrases, or inversely, of mostly English with some Spanish words or phrases. It can begin with hybrid words such as parkiar—as in voy a parkiar el carro. The verb in English is to park but conjugated with the iar of Spanish. All the signs on the streets in the U.S. use the word “parking”. There is always a sign telling you that there is no parking, or you have to pay for parking, and so of course, you have to look for parking.

Spanglish grows directly from telling the stories of our lives. They can be speaking English and then a reference arises to getting la chancla from their mother as a form of punishment. Also, references to food and family are fertile grounds for Spanglish. Everyone has someone in their family who is a mandona or bossypants or a sangrona or jerkface. When I tell someone that my mother made un caldito de pollo I am letting them know that she made me a healing bowl of love that takes me back to my childhood, and that is much better than regular chicken soup. One exception to the Spanglish rule is curse words which sound good in any language.

When I was a little girl, I used to think that English and Spanish were two different worlds. I grew up speaking and dreaming in Spanish. My blond neighbor who was my age would try to talk to me in English and it was unintelligible to me. Slowly, as I began to learn English , I did enter into a whole new world where what I was told at home was no longer all I knew. I became another person in addition to the girl I was at home.

This other person speaks, and writes, and dreams in English now, but when she speaks Spanglish, the girl that I first was joins in. 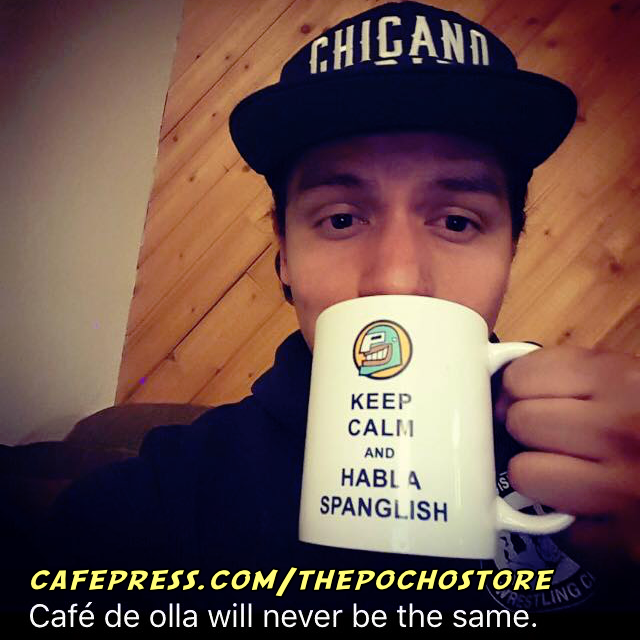 Click here to go to THE POCHO STORE for your very own Keep Calm and Habla Spanglish mug, tshirt or hoodie. Our dapper spokesmodel, Chicano Punk Rock Artesano Junco Canché, is not included with your purchase.