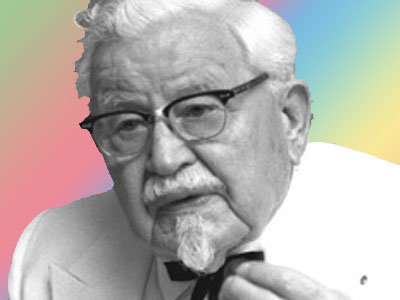 (PNS reporting from DIXIE) Legendary chicken mogul Col. Harlan Sanders is a hawk in the chicken culture wars and he’s not afraid to let the whole clucking chicken world know it.

I completely respect the Chick-Fil-A chicken restaurant business built by CEO Dan Cathy, and the Christian principles you espouse are fine as wine, but come on, give it a Goddamn rest. Are you selling chicken or your dumb-ass views? This guy is as full of wind as a corn-eating horse.

I personally don’t give a good Goddamn what the homos do in the privacy of their nicely-decorated bedrooms. Hell, they can do it in the bathroom of the KFC, I don’t give a June Bug’s nut sack! I just want their money. Do I hate gay marriage? Who gives a duck’s ass?! Buy some of my chicken. Come in with your flamin’ gay self and order a bucket of Original, Crispy, or BBQ. Hell, I might even come up with a new flavor, “Extra Gay”!

I will cater your gay wedding, hell, bring it on, Adam and Steve. I’m a business man, I just want your money, boys! Same goes for you ladies, pretty and masculine lookin’ alike. Come get your chicken meals at KFC  on your way to go campin’ in the woods and such.

Chick-Fil-A not only tastes like a hen just crapped in your mouth, but it’s got a queer name! Why don’t you just call it, “Cock-In-Your-Mouth?”

Come on now, that pious egg sucking dawg CEO Dan Cathy (named for a girl) is so stupid if his brains were dynamite, he couldn’t blow his nose! He’s set to lose so much money, I bet he’s as nervous as a whore in church. Cathy, sweetheart, stop this stupid cockfight, and get with the gay program. Stop your bitchin! You’d complain if Jesus came down from heaven and gave you a 5 dollar bill. Shut your fat cherry pie hole and sell some chicken to your customers. “Cathy.”