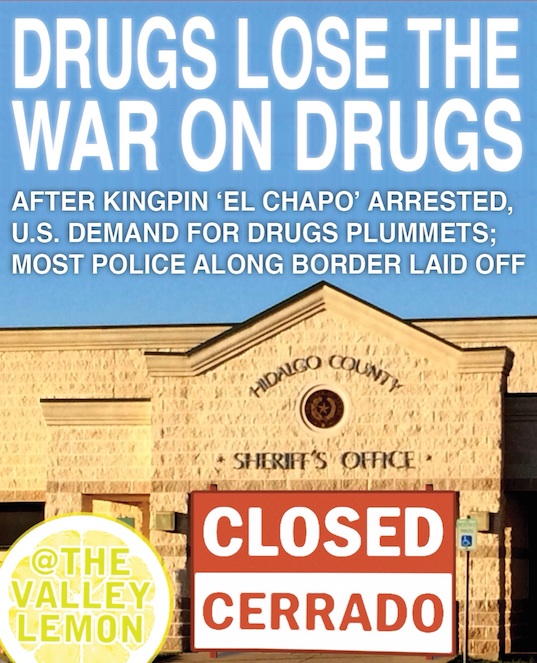 “I mean, yeah, you might see a bar fight or a burglary every now and then, but I don’t see us ever needing to investigate any real crimes ever again,” the sheriff said. “My office is now basically nothing more than an outfit of glorified traffic enforcers.”

“It was almost like magic,” said Romeo Gonzalez, 29, of McAllen. “I was literally on my way to stick up this Stripes so I could go pick up some crystal, but then I thought, like, ‘You know, I really don’t even want it that bad, maybe I should go do something else with my life.’ So I ended up driving right past the Stripes and went to the library and got signed up for a GED class.”

Other lives, though, seemed headed in the other direction.

“I’m worried,” said a now-former 12-year-veteran Mission police officer. “I’ve got bills, a mortgage. You try telling my kids they can’t go to Disney World after all because we won the War on Drugs. Doesn’t sound so good that way, does it?”

But it’s not just the salary and benefits the officer — who requested anonymity to speak candidly about past illegal activities — will miss.

“I used to double, triple my pay checks some months escorting drug loads. How am I supposed to make up that money now? Taking under-the-table cash from politicians to pass around my neighborhood in exchange for votes?”

The officer then remained silent for several seconds before abruptly ending the interview.

Story and artwork republished courtesy our new friends at The Valley Lemon. You can follow them on The Twitter, too!