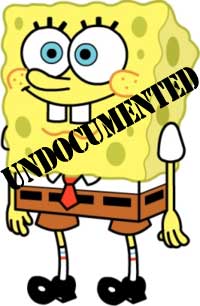 “You see me working at the Krusty Krab as a fry cook? I have a master’s degree in oceanography from Stanford, but frying up Krabby Patties is the only job this Mexican could get without papers!” the colorful invertebrate told reporters. “And for extra cash, I let a crew follow me around 24/7 for a childrens’ reality show. That’s the kind of mierda you have to soak up when you’re a ‘mojado!'”

The amarillo actor said he had worked in Eugene Krabs’s fast food restaurant for over a dozen years but has “never been trusted enough” to handle the cash register. “He lets a squid handle the money! A squid! With the tentacles! Ai yai yai!”

Retired actor W. E. Coyote, a Native American activist, insisted on attending the press conference, despite the heat and his infirmity. “Bob is my compadre from another madre,” he explained.

Confined to a wheelchair for over a decade, Coyote, 78, has only recently been recognized as America’s leading painter of trompe l’eoil tunnels.

“I may have worked on the Warner Brothers lot,” Coyote told PNS, “but I was never anyone’s bro. I was always ‘the coyote,’ never a character in my own right. It was ‘meep meep, meep meep’ every day and I had to [expletive deleted] scramble.”

Spokesmen for Nickelodeon and Immigration, Customs and Enforcement (ICE) refused to comment on the revelation, but a Nickelodeon insider with knowledge of the SquarePants deal said the network only has a contract with SquarePants, Inc. to produce the show and that Esponja is not a Nickelodeon employee.