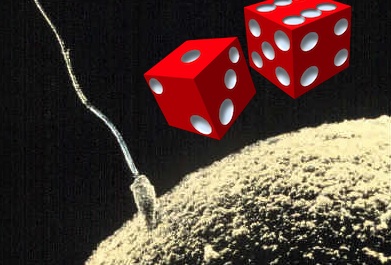 Are you a father? If so, your big day is here.

Dinner plans are in motion. The finger paints are out. You can hear the ugly ties and BBQ equipment being poorly wrapped  by tiny hands with still-developing fine motor skills. Glitter is strewn about the kitchen like the aftermath of a grisly triple Twilight-vampire murder scene.

Now, let me cast a doubt on your most precious day, “Dad,” if that’s what the little sticky-fingered heathens are calling you.

Take a really good look at that kid. The one – who like some Pavlovian dog – wants ice cream every time he/she hears bells. The one who seems to outgrow shoes every 18 hours and who loses his/her retainer every other week. The one who bit you when you were trying to leave the park the other day and vomited all over your car’s interior like some twisted Dr. Moreau sprinkler system gone awry.

It is estimated that 4-10% of men are unwittingly raising someone else’s kid.

To that El Guapo replies, “Has ‘your’ child’s mother aggressively underscored this point – perhaps, in hindsight, suspiciously so? Has she said that the nape of your neck and the kid’s are virtually identical? Only you can answer that.”

Of course, truth be told, the odds are with you. But I hope to have cast just enough doubt to make your Father’s Day a more interesting one.

May the odds be ever in your favor.

Your handsome and humble servant — El Guapo. El Guapo writes The Daily Refried, and is, without question, the foremost authority on all things sinvergüenza. Follow him on Facebook or Twitter @TheDailyRefried.