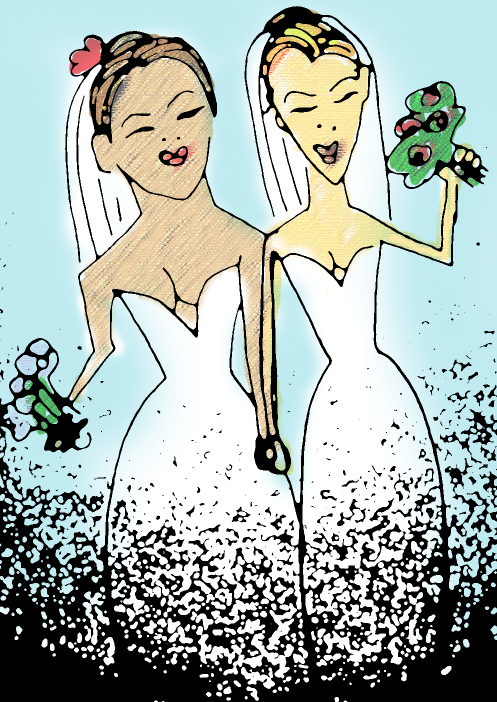 I was at a party the other night when a group of women asked me how long I’ve been with my boyfriend. Oh boy.

I told them six years and braced myself for the onslaught of “WHY AREN’T YOU MARRIED! HE NEEDS TO GIVE YOU A RING! BLABLABLABLA” and so on and so forth.

As a woman who consciously chooses not to get married, I’m constantly dealing with this sort of thing. People just don’t understand why.

Is my boyfriend a commitment-phobe? Are we swingers? Are we not serious? Never are we thought of as a happy stable couple content to just enjoy each other’s company.

No, something must be wrong with us.

In choosing not to get married I’ve become painfully aware how important marriage is in our society. It is a symbol of acceptance, accomplishment, and normality. As the Supreme Court looks over Proposition 8 and DOMA this week, I started to wonder why our culture is so, uh, married to the idea of marriage.

Certainly, there are basic rights, benefits, and entitlements  granted to married couples that, from a secular stand-point, we should all have access to. However, marriage is more than just a bureaucratic status.

For better or worse (pun intended) marriage is the building block of society. This is why we need marriage equality. Not only is it a constitutional right, it means gay couples will become a standard part of the conversation, a brick in the foundation of American society — a more tolerant society, a more equal society.

While I resent having to submit to an ancient ritual just to be accepted as normal — and to not be harassed by women clucking over the female entitlement to marriage — I am grateful that I can choose for myself what I want. Everyone should have this right. EVERYONE should be subject to the harassment of their friend should they decide not to marry.

I am eternally grateful for this right. When I think about the history of marriage, it often paints archaic images of a child bride being sold off for six cows. I can’t imagine what it was like for my 16-year-old great grandmother, married off to a 43-year-old widower with teen-age daughters. Obviously, the institution can and has evolved.

Marriage came about because men needed to know their children where actually genetically theirs. Women have the advantage of always knowing their genes are being passed down. In fact, now that women can own property, we really have no need for marriage (I’m kidding, that’s a joke, I’m a comic, hi.)

There was a time where we needed to procreate as much as possible. However, at eight billion strong, I think the human race will be OK. And of course, many gay couples do have children just as some straight couples opt out of having children. Both of these things are happening now and need to be accepted.

Once gay couples gain the right to marry, I think it will open up a larger conversation about the American Dream and the pressure to get married and have children.

I’ve always been very career-focused. Statistically, married women are taken less seriously in the workplace — they are perceived as less willing to work long hours and thought to be more distracted by outside responsibilities (while the opposite assumption accrues to men.)

I think granting marriage equality would definitely help change these perceptions and break up the stereotypical roles that are placed on a married couple. However, all these statistics and history make it easy to overlook the most important aspect of marriage:

Love has always existed, maybe it wasn’t always a billion dollar industry packaged with diamonds and champagne (that’s a whole other article), but I’m sure cavemen fell in love. And love has led us to this moment.

As cheesy as it sounds, I need to know the majority of humans are capable of love and willing to pledge their life to another human being, and that we as a society are not just tolerant but appreciative, thankful, and in awe of this love.

Plus, I really want to attend a lesbian chonga wedding.