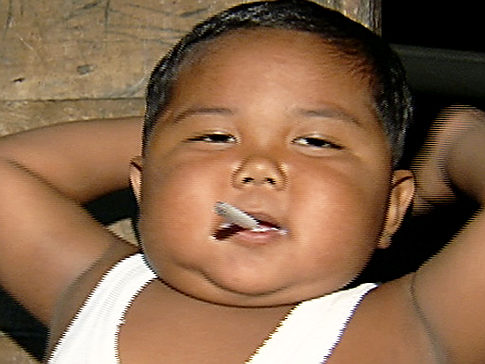 Are you in this country legally?

No, I crossed illegally by swimming across the Rio Gland. Yes, of course I’m here legally, I popped out of where all the babies pop out of around here. My dad even shot a video. Gross!

Why did you come to this country?

We just want what all the white babies want. Free food, someone to wipe my butt, hours in front of the TV. You know, the American Dream.

But some conservatives say you don’t share American values.

Sure we do. I love to lay on my back asleep for hours at a time. I don’t know what a job is. And my goal is to be as fat as a house. What’s not American about that?

Is it true you are uneducated?

No, I’m a fuckin’ Harvard graduate. Of course I’m uneducated, I’m a goddamn baby! I haven’t even been to Pre-K. I haven’t even gotten through a full episode of Dora the Explorer! If you ever meet a baby that comes out of the womb talking at a college level, its time to call an exorcist.

Are you in a gang?

Do you have plans to vote Democratic?

Well, let me just say that the Democratic candidate for President seems like a fun dad, even though he wears Mom jeans. But the Republican dude is scary, he looks like a soap opera doctor. And doctors make me cry.

Phyllis Schlafly said that American is becoming non-white, and that it’s your fault.

All right, that’s enough, baby. Are you threatening to turn America non-white?

Of course I am. This country needs improvement. Now that we’re in charge, things are gonna change around here. Have you tasted white people’s baby food? That shit is bland. I need some SABOR in my baby food. How about some Cream of Carnitas, or Strained Chorizo con Huevos?  And the juice, oh my God. Apple juice makes me sick, how about tamarindo once in a while?

You gonna finish that beer?