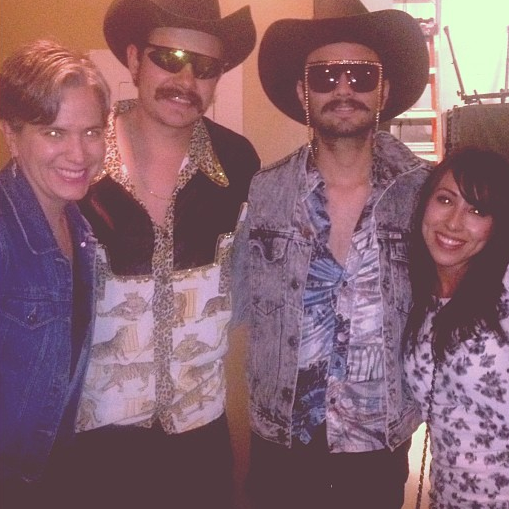 If you’ve ever wondered what it would be like for a Mexican hipster to remake some of your favorite English-language songs in an alternative cumbia style while wearing hipster mustaches and silver sneakers, you need look no further than Los Master Plus.

I first heard of the Guadalajara duo with their remake of King of Leons’ song, Sex on Fire, Sexo en Fuego, a homemade and tongue-in-cheek music video that makes fun of both hip hop and rock music videos in one fell swoop, last year.

Last week I hung out with El Comanche and Larry Mon at The Conga Room in Downtown Los Angeles.

The crowd was a mix of Latino and white hipsters, nerds and rockers, all of whom exploded with joy when Los Master Plus opened their set with their version of Daft Punk’s Una Vez Más, also known as One More Time.

In addition to some all-out cumbias, the group performed a bunch of other covers, sprinkled with cumbia dance breaks, each of which buoyed the crowd’s enthusiasm. There was No Doubt’s Don’t Speak, as well as Snoop Dogg’s Smoke Weed Everyday,.

Backstage I had a few minutes to sit down with El Comanche and Larry Mon and I found out that not only are they very serious about their music, but they are also set to record their first record this summer, after a U.S. and European “mini tour.” Oh, and that they love pochos and wish there were more positive energy in their native Mexico.

“Pochos are a phenomenon that is easy to understand, it’s natural to mix two cultures. Some people say one culture more than other, or ‘That’s not right,’ but I think it is,” said El Comanche, who was wearing a gold-sequined shirt with cheetahs and tigers that matched his bandmates’.

“As long as you feel love for the country, it doesn’t matter if you don’t live there — maybe you’ve never lived there — but you feel connected to your roots and that’s cool.”

The duo don’t consider themselves to be hipsters, although much of their schtick seems to center around taking U.S. subcultures like hispters and reinventing it in Mexico for local consumption. They said their mustaches are “puro mexicano” because all their male relatives always had mustaches. It’s just Mexican, they said, and shouldn’t overshadow their music.

“We don’t have any objective other than fun, dancing, wanting people to enjoy music. What we’ve tried to do is make music that transcends language, culture, and I think we’ve done it well because we can be playing in a bar in Guanajuato or we can be in New York, and music is universal — it’s for everyone,” Mon told POCHO.

The group’s record should be done by the summer and should include more original songs as well as some collaborations that so super top-secret and they couldn’t tell us.

Until then, enjoy the Sexo en Fuego video.