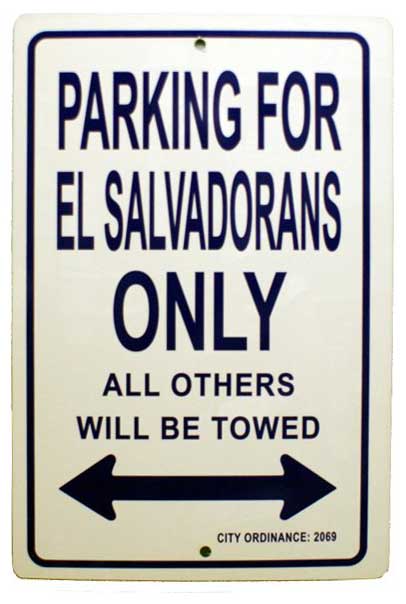 People with roots in El Salvador may soon replace Cuban-Americans as the third-largest “Hispanic-origin group,” according to The Pew Research Center:

For more than 40 years, one rock-solid element of Hispanic demographics has been the relative ranking of the three largest Hispanic-origin groups: Mexicans have always been the largest by population, followed by Puerto Ricans and then Cubans.

But what does this mean to me, you ask? Here are the Pocho Ocho things you should know about your new neighbors:

8. Salvis, they put the USA in pupUSA

7. Pupusas: They’re made out of pupas!

5. They make two-thirds of the “comedy” group Culture Clash

4. On average, they are 3/4″ taller than Guatemalans

3. Can also be called Salvadorans, Salvadoreans, Salvis, Salvatruchas and DeLoreans

2. Are found in Central America, the Central US and South Central LA

They keep a machete in the closet.

This story mostly by Malcolm Mex.

You can get your own Salvador parking sign here.