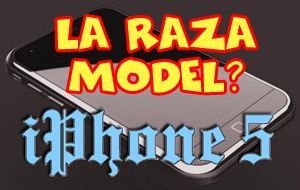 (PNS reporting from SILICON VALLEY) Apple fanboys, Wall Street, tech geeks and Samsung engineers are eagerly awaiting Apple’s announcement of a new iPhone model today, and some inside sources are predicting a breakthrough product aimed at the growing Latino market.

The iPhone 5 — code-named iPhone La Raza — is said to include these new features:

Mas…Is this the new iPhone 5 AKA iPhone La Raza?