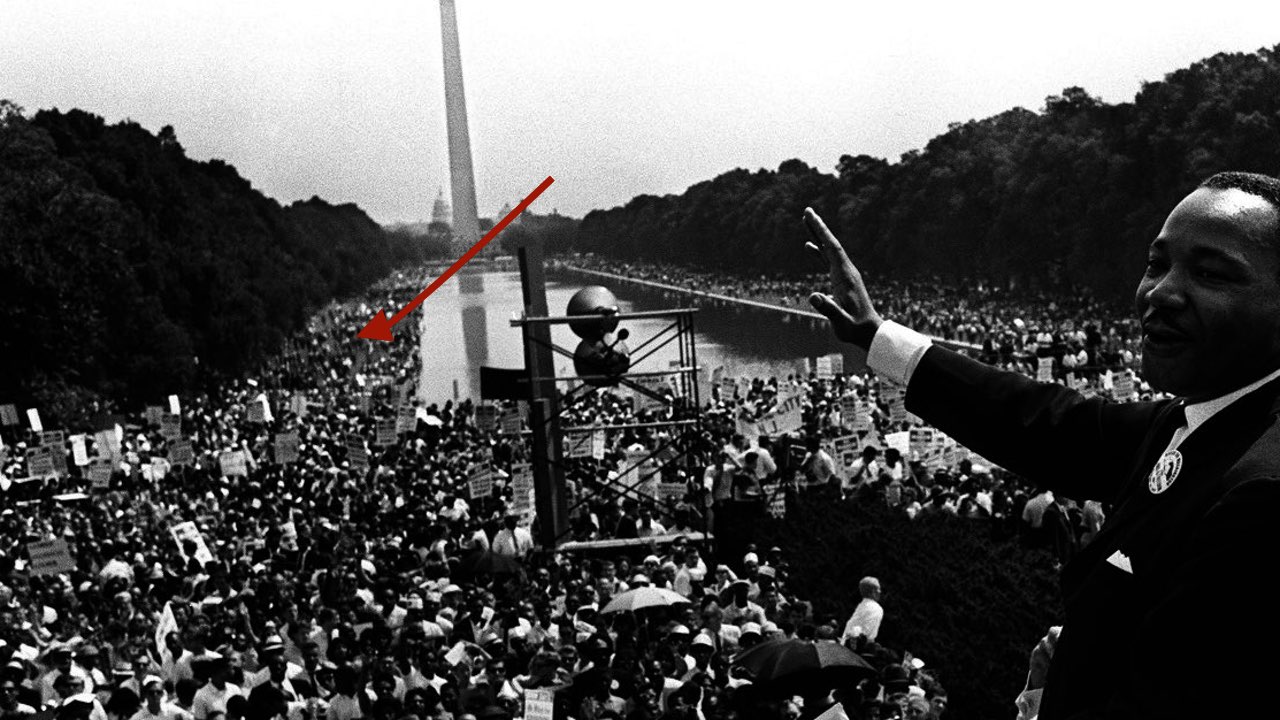 They say the Washington, D.C. weather — typically mondo muggy in the summer — was unusually mild on August 28, 1963. But the air burned with the fire of freedom on the march, the March on Washington for Jobs and Freedom, led by Martin Luther King.

I remember it as hot and muggy, but it was a long time ago; I was 16 and about to start my senior year at Haverford High School in the Philadelphia suburbs.

I came down on a bus from Philadelphia — one of 2000 that converged on the Capital — with my mom and her crew from the Philadelphia Chapter of the American Jewish Congress. (Photo shows  MLK waving to me and my posse [arrow] next to the reflecting pool.)

I don’t remember his speech at all. I do remember warm-up acts Peter, Paul and Mary singing, and Joan Baez, and my hero, Bob Dylan.

But mostly I remember Dr. King’s speech, the “I Have A Dream Speech.”

I embraced his vision of racial justice then and it’s been an ideal I have worked to achieve ever since, both in my personal relationships and in larger community settings.

When we all held hands in Washington, and sang We Shall Overcome, we meant it.

But here we are.

Fuck the traitors, the haters, the grifters, and the colluders. Fuck the KKK.

And fuck the Nazis.

I HAVE A DREAM! LET FREEDOM RING!

Five score years ago, a great American, in whose symbolic shadow we stand signed the Emancipation Proclamation. This momentous decree came as a great beacon light of hope to millions of Negro slaves who had been seared in the flames of withering injustice. It came as a joyous daybreak to end the long night of captivity. 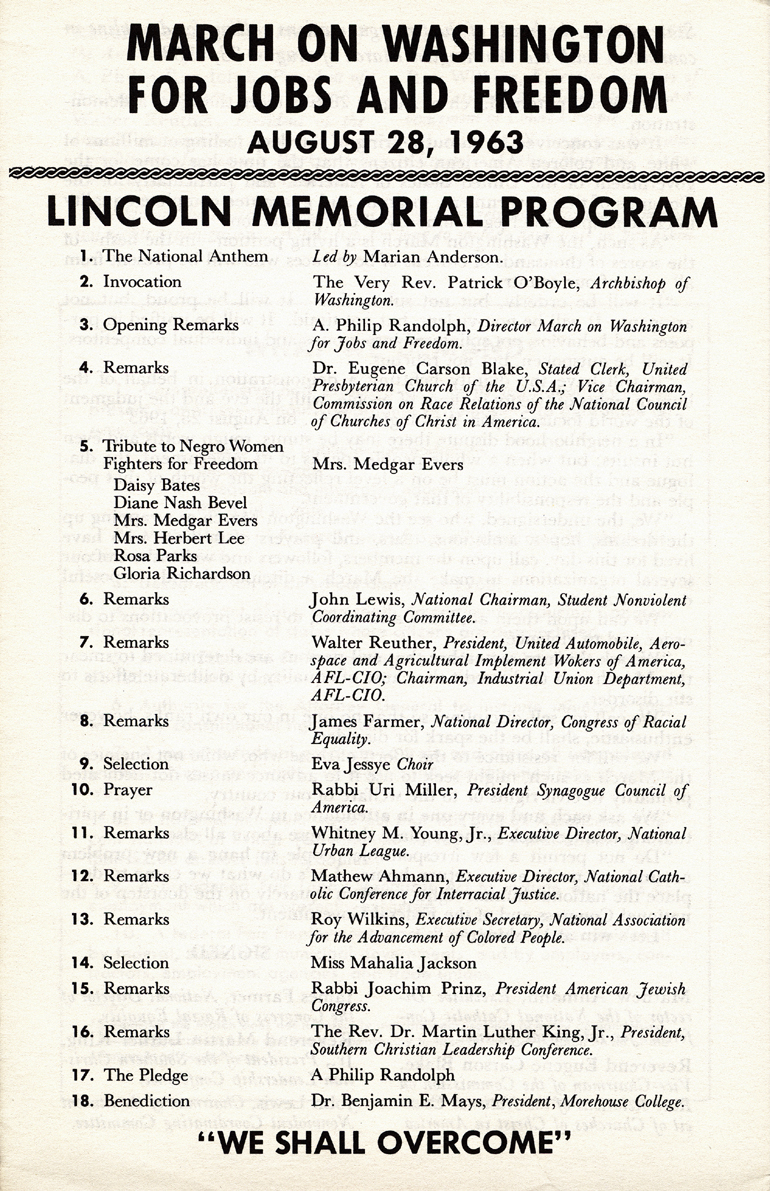 In a sense we have come to our nation’s capital to cash a check. When the architects of our republic wrote the magnificent words of the Constitution and the declaration of Independence, they were signing a promissory note to which every American was to fall heir. This note was a promise that all men would be guaranteed the inalienable rights of life, liberty, and the pursuit of happiness.

It is obvious today that America has defaulted on this promissory note insofar as her citizens of color are concerned. Instead of honoring this sacred obligation, America has given the Negro people a bad check which has come back marked “insufficient funds.” But we refuse to believe that the bank of justice is bankrupt. We refuse to believe that there are insufficient funds in the great vaults of opportunity of this nation. So we have come to cash this check — a check that will give us upon demand the riches of freedom and the security of justice. We have also come to this hallowed spot to remind America of the fierce urgency of now. This is no time to engage in the luxury of cooling off or to take the tranquilizing drug of gradualism. Now is the time to rise from the dark and desolate valley of segregation to the sunlit path of racial justice. Now is the time to open the doors of opportunity to all of God’s children. Now is the time to lift our nation from the quicksands of racial injustice to the solid rock of brotherhood.

It would be fatal for the nation to overlook the urgency of the moment and to underestimate the determination of the Negro. This sweltering summer of the Negro’s legitimate discontent will not pass until there is an invigorating autumn of freedom and equality. Nineteen sixty-three is not an end, but a beginning. Those who hope that the Negro needed to blow off steam and will now be content will have a rude awakening if the nation returns to business as usual. There will be neither rest nor tranquility in America until the Negro is granted his citizenship rights. The whirlwinds of revolt will continue to shake the foundations of our nation until the bright day of justice emerges.

But there is something that I must say to my people who stand on the warm threshold which leads into the palace of justice. In the process of gaining our rightful place we must not be guilty of wrongful deeds. Let us not seek to satisfy our thirst for freedom by drinking from the cup of bitterness and hatred.

We must forever conduct our struggle on the high plane of dignity and discipline. We must not allow our creative protest to degenerate into physical violence. Again and again we must rise to the majestic heights of meeting physical force with soul force. The marvelous new militancy which has engulfed the Negro community must not lead us to distrust of all white people, for many of our white brothers, as evidenced by their presence here today, have come to realize that their destiny is tied up with our destiny and their freedom is inextricably bound to our freedom. We cannot walk alone.

Go back to Mississippi, go back to Alabama, go back to Georgia, go back to Louisiana, go back to the slums and ghettos of our northern cities, knowing that somehow this situation can and will be changed. Let us not wallow in the valley of despair.

I say to you today, my friends, that in spite of the difficulties and frustrations of the moment, I still have a dream. It is a dream deeply rooted in the American dream.

I have a dream that one day this nation will rise up and live out the true meaning of its creed: “We hold these truths to be self-evident: that all men are created equal.”

I have a dream that one day even the state of Mississippi, a desert state, sweltering with the heat of injustice and oppression, will be transformed into an oasis of freedom and justice.

I have a dream that my four children will one day live in a nation where they will not be judged by the color of their skin but by the content of their character.

I have a dream today.

I have a dream that one day the state of Alabama, whose governor’s lips are presently dripping with the words of interposition and nullification, will be transformed into a situation where little black boys and black girls will be able to join hands with little white boys and white girls and walk together as sisters and brothers.

I have a dream today.

This will be the day when all of God’s children will be able to sing with a new meaning, “My country, ’tis of thee, sweet land of liberty, of thee I sing. Land where my fathers died, land of the pilgrim’s pride, from every mountainside, let freedom ring.”

Let freedom ring from the snowcapped Rockies of Colorado!

Let freedom ring from the curvaceous peaks of California!

But not only that; let freedom ring from Stone Mountain of Georgia!