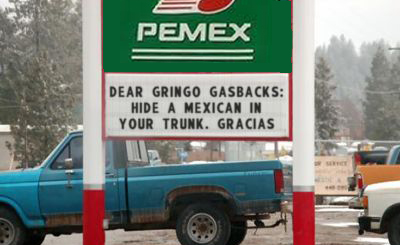 (PNS reporting from TIJUANA) Soaring prices at the pump are  sending Americans  to El Otro Lado for a break on pricey petrol purchases,  creating a furor over a new class of immigrants called “gasbacks.”

Even the most ardent American vigilante is willing to bypass his hatred of Mexicans as well as the metric system to fill up on precious litres of Pemex gold.

The streets are literally humming with Hummers in towns all across the border, and the “giant sucking sound” of thirsty SUVs siphoning gas into the U.S. can be heard for miles.

“It’s driving me crazy, but they need to go back to America,” said a Juarez gas station owner who refused to give his name. “I can either fuel all these pinche gas-hungry yanquis, or I can keep the narcotrafficantes’ armored trucks on the road – and avoid getting my head cut off and stuffed in a bag.”

Many are criticizing the Border Patrol for turning a blind eye when luxury cars wheel up to the border fence in the black of night and a gas hose is hurled over by shady petrotraficantes.

his new breed of smuggler has cut hundreds of paper thin slits in the border fence just wide enough for credit cards to be surreptitiously passed through, as payments are handled via square.com using jailbroken iPhones.

Gas prices in Mexico are about two dollars a gallon cheaper than those in the U.S., making the trek across the border irresistible to gasbacks.

“Sometimes I’ll check the gas prices on the way down, and the peso will devalue by the time I get to the pump, giving me even greater savings,” said one gasback waiting to sneak into Mexico.

Not everyone is happy about this development, especially U.S. oil companies who have worked hard to screw the American consumer.

Analysts say the rise of the petrotraficante is going to see a increase  in conflict among oil cartels.

“There is some concern about potential rivalries between Mexican and rival Venezuelan petrotraficantes.  The Venezuelans are infringing on this booming border trade with cheaper, government-subsidized gas.

Gas station sign image based on a script at Says-It.com