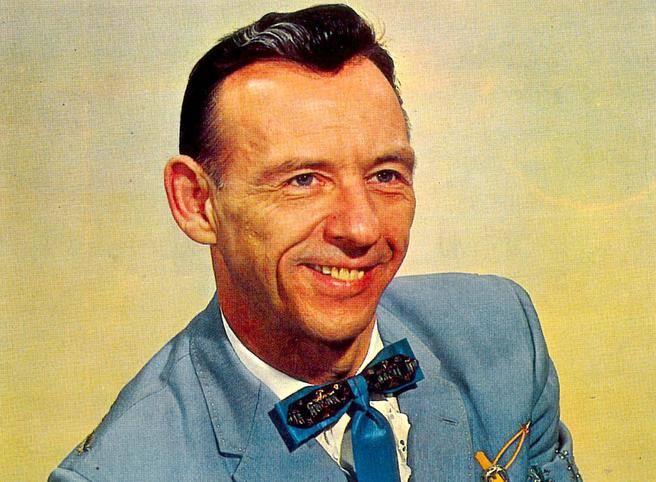 A story of cross-border romance — a mojado and a Cajun queen — are the stars of country singer’s Hank Snow’s Mexican Joe and Joli Blon, released on 78 RPM disk in 1953.

Here are the lyrics and guitar chords (via Genius Lyrics) so you can sing and play along!

He walked up to the bar and said, “I think I’ll have a drink
Three fingers of tequilla; will clear my head, I think.”
Well, she looked around and caught his eye
And Joe said, “I … yi, yi, yi, yi.”
When Mexican Joe met Jole Blon

Joe said, “Lovely senorita
Let’s go out and paint the town.”
So he danced her and romanced her
And he showed that gal around
Jole Blon said, “I’m so hungry.”
And she breathed a little sigh
So he fed her filet gumbo, enchiladas, on the side

Then he held her close and whispered
“Will you be mine for life?
She said, “Oui, monsieur, but tell me
What’ll we do about your wife?”
But he shouted, “Ah, Caramba
I think I’d better go.”
So he swam he swam across the river
And went back to Mexico

Who is that MEXICAN JOE? We’ve got video and lyrics!

Mexican Joe was a happy-go-lucky gambler, playboy and sneak who topped the country and western music charts in 1953 in this song by “Gentleman” Jim Reeves.

South of the border, hey, I know a lad,
He’s got more fun than anybody’s had,
Don’t got no worry, don’t got no dough,
Everybody’s wondering ’bout Mexican Joe.
In old Mexico, they call him the Rhumba King,
Leads all the women around on a string,
When they go out, they get a million thrills,
But the lovely senoritas wind up with the bills.

He makes the night spots all along the bay,
People want to see him when he comes their way,
He spreads so much joy everywhere he goes,
Everyone shouts “Viva la Mexican Joe.”
He likes to gamble, at poker he’s an ace,
He’s always lucky with the cards that got a face,
At winning the money, he is sure a whiz,
But when they win they don’t collect
’cause they don’t know where he is.

He don’t [pay] no income tax ’cause he don’t got no dough,
Still he gets along just fine, how we’ll never know,
He’s got everything he wants, a girl, a drink, a song,
If we use his formula, we surely can’t go wrong.
His favorite playground is anywhere there’s girls,
He’s got that somethin’ that sets their hearts a-whirl,
It couldn’t be his money ’cause he ain’t got a peso,
But when he wants a kiss all he’s got to do is say so