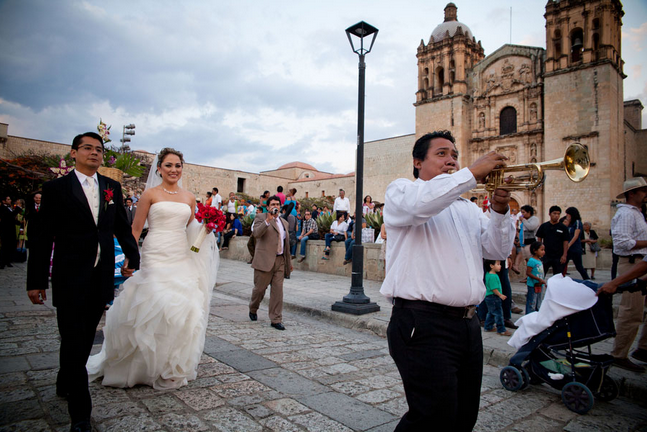 It was very interesting growing up in a Mexican household yet being educated in predominantly “white” schools.

For example, a sleepover is almost like a rite of passage for young children.

But my Mexican parents could never understand why I’d want to sleep at someone else’s house when I had a perfectly good bed at home. Needless to say, I never had many sleepovers growing up.

But the biggest difference between the two cultures I grew up in wouldn’t arise until my early 20’s.

As a Mexican American with a litany of cousins and extended family, I cannot count the number of weddings I attended as a child. But I didn’t attend my first white wedding until one of my best friends got married in 2008. By then I was 20. Boy was in for a culture shock.

So for your enjoyment, I thought I’d break down the main differences between Mexican and White weddings. Now, I know white isn’t exactly a politically correct term, but it’s much easier than saying “Upper middle class, gun-wielding, baseball enamored,Anglo-Saxon Wedding”. So bear with me.

I’ve always wondered why Mexicans bother to send out invitations. No matter how many are sent out, one can always count on 500+ people showing up. A Mexican wedding is seriously like an open invite. Even if you only know the cousin of the bride’s uncle, you’re invited. Social networking? Shit, Mexicans invented that. And the great thing is, when you show up, you’re immediately treated like family. You can count on a large portion of carnitas and one or twelve Bud Lights being immediately served to you.

The white counterparts though, seemingly take a much more convoluted approach to invitations, and pre-invitations. Basically it goes like this: An announcement of the wedding, a save the date notification, a reminder, a formal invitation, a reminder to RSVP and let’s not forget a registry notice. I once had the bride-to-be of a close friend heckle me about mailing back my RSVP. My initial reaction was “The fuck? I already told you I’m going.” The RSVP concept was new to me. If I go, you’ll see me there.

At a Mexican wedding, the seating chart is really easy: Sit wherever you and your twelve immediate family members can fit. The only unwritten rule is that you never EVER sit next to someone your mother has been ignoring for the past eighteen years. Mexicans have this thing were they fight for no apparent reason. But instead of solving the issue like their white counterparts they take the high road and pretend the person their fighting with doesn’t exist. Most of the time, the beefing parties forget why their mad at each other. Makes for interesting (read: awkward) family photos.

The white counterparts take great pride in situating their guests themselves. It was awkward at first to be told where to sit (Bitch this isn’t 5th grade!). But in my experience it has always worked out. Except that one time I was accidentally sat at the kid’s table.

At white weddings though, this is a very black and white. Either there WILL be an open bar, or there will be no alcohol. Usually if there is no booze, it’s because the bride’s uncle is a recovering alcoholic or something. In that case, it takes some scheming and various trips to the car to get alcohol.

No matter how many people go to a Mexican wedding, their will always be more than enough food. I think the organizers ration it out to 5 pounds of food per person. No wonder so many of my tias always leave weddings with a foil-covered plate (and the centerpiece too)

I found out why white weddings require RSVPs: to know how much food to order. A bit disappointing for someone like me who eats like a weightlifter. But unlike Mexican weddings, were you can always count on carnitas, rice and beans, white weddings surprise you with the wide array of choices they offer. Assuming you indicate what plate you want on the RSVP. And white weddings are vegan-friendly. Good luck explaining to a Mexican woman that you don’t eat meat. Pussy.

So does one group have better weddings than the other? No. Because at the end of the day it’s a celebration about the soon to be married couple’s love. Sure the differences are many, but weddings are always fun.

Besides, so far they’ve always ended the same for me: Drunk and hitting on bridesmaids.

Assuming I’m not related to them, of course.