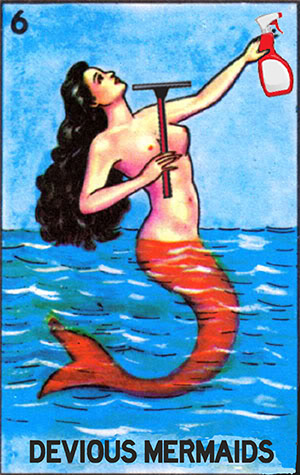 (PNS reporting from HOLLYWOOD) Animal Planet Latino will be premiering a new “documentary” series that has stirred the waters of controversy.

The new cable show, Devious Mermaids, will explore the lives of five captured Latina mermaids who live in a giant tank on display at a Florida aquatic park set in the fictional town of Orlando.

Critics of the show are disturbed by what they call misleading and unrealistic portrayal of Latinas.

They also are assailing creator Marc Cherry, charging that as a middle-aged landlubber, he is insensitive when it comes to interpreting the experience of Latina mermaids.

Devious Mermaids, however, is being supported by one person who has nothing to gain from this situation.

The executive producer of the series, television actress Eva Longoria, defends the show:

In the world of television, the palette of content is colored with many ethnicities, races, classes, genders and species.

Says Longoria, “Devious Mermaids is a show that centers on five Latina aquatic apes who are bonded together by their jobs, their ambitions, their dreams and their struggle to escape. The five try to cope with their unfamiliar new environment, making it a  classic ‘fish out of water’ story.”

Longoria, who just received her masters degree in Marine Biology, says the setting is a 1.6-million-gallon show tank and a seven-million-gallon holding tank which doubles as an aquarium viewable by the public.

The Latina mermaids are tasked with cleaning the tank, from the inside of course, but also have other hopes and dreams. Longoria says, “I understand that some people are upset with the portrayal of these five Latina mermaids as stereotypes, but the five are mermaids by occupation only; it is what they do, not who they are.”

But are scaly, gill-breathing mermaids a realistic reflection of Latinas in America today?

“Yes,” says Longoria, “but they are not a reflection of every Latina.”

Longoria added, “The only way to break a stereotype is to not ignore it. The stereotype we are grappling with here is that as Latinas, all we are is mermaids, swimming about, enticing sailors and catching fish with our bare, webbed hands. And yet, this is a show that deconstructs the stereotype by showing us that mermaids are so much more.”

The five Devious Mermaids are

Media critic and blogger Andrea Mares wrote in a recent post that, “Devious Mermaids is just another missed opportunity to portray Latinas in a positive, non-cryptozoological way. They are all hypersexualized and topless, plus they speak in these fake, exaggerated mermaid accents. Also, the roles of their sea park trainers are all played by Caucasian land primates, which reinforces their power relationship over the tank-dwelling mermaids.”

When asked why all five roles had to be maids, show creator Cherry said, “Because no one would believe that five Latina mermaids would not be maids. I mean, they’re Latina mermaids. It’s right there in their name.”