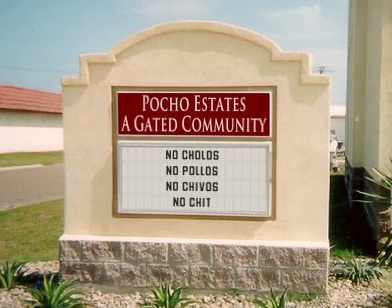 Girl Scout Cookies: Troop 112, sponsored by the Pocho Estates Women’s Club, will set up a table next Tuesday after school outside the Safeway on Ritchie Valens Drive. Thin Mints are in short supply so quantities are limited, with only two boxes per person. Cash only, no layaways.

Band Concert: The Edward Olmos Middle School Concert Band invites you to their first performance of the New Year Thursday at 3 PM in the school auditorium. The program includes Stairway to Heaven, LaLaLaLaLa Means I Love You and Turn the Beat Around .

Lodge Meeting: The regular monthly meeting of Pocho Estates Burrow of the Order of Los Stinking Badgers, usually held on the third Wednesday of every month, will not take place on March 21 due to the untimely passing of Elder Weasel Danilo Guzman. The family appreciates donations in his name to Los Badgers Boys Baseball Camp.

Police Blotter: At 7 AM this past Sunday morning an early-rising jogger on Tapatio Trail was assaulted by ironically-mustachioed men on fixed gear bicycles who “hit him about the torso with empty Pabst Blue Ribbon cans,” according to a report filed at the East Pocho Sheriff’s Station. The victim, a 33-year-old resident of the Pocho Arms townhouse development, was treated at Ricky Martin Luther King General Hospital and released. He described his assailants as “gentrified” and “ironic.”

Open for Business: This columnist is happy to welcome upscale jeweler Oooh! Shiny! to the Pocho Promenade. Proprietor Julia Rivero, who opened the store right before Valentime’s Day, tells us she was overwhelmed by the demand for watches. “Does anyone really know what time it is?” she asked.

Do you have any society news we can use? Send it to me, Chale Knickerbocker!