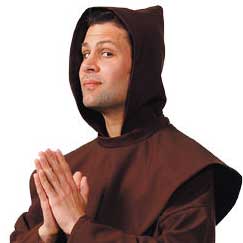 Cassius, a Brandy and Benedictine monk in this town close to the Canuckian border, is the newly-elected praetor of BELL (Bitches Ego Loquemur Latine/I Speak Latin, My Good Sir) an international association of proud Latin speakers determined to reclaim the word “Latin” from Latino marketeers.

“Your products or services are for the Latin community? Talk Latin to me, baby. Fiat lux,” he said.

“Look,” he told PNS. “I get it. I have a lean and hungry look. I was beware of the Ides of March before it was even the Ides of Febrvary. And amō, amāre, amāvī, amātum Novo Odor Seculorum — a great alt.techno.newwave band — but e pluribus unum, you know? Res ipsa loquitur. Gallia in tres partes divisa est. Veni, vidi, vici and in hoc signo vinces, totally.”

“You want to sell me Latin Clorox? Ad aspera per astra — and I got yer habeas corpus right here. Carpe diem.”