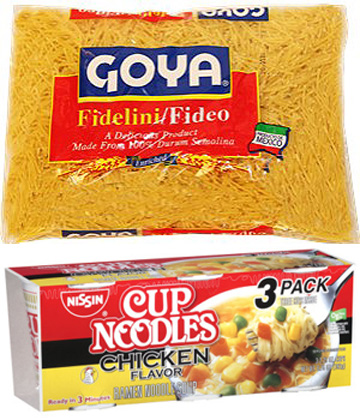 (PNS reporting from EAST LOS) Paola Lopez’ dreams were shattered and her heart was broken Friday after she prepared sopa de fideo for her boyfriend, Sunny Vargas.

“I just thought it would be nice to make him a quick snack before we went out,” the 28-year-old woman tearfully recounted to PNS. “Then all of a sudden he got all mad and left me. He broke up with me in a text that night.”

The tragedy began Tuesday when Vargas, a  sales representative for a Pico Rivera power tools importer and distributor, told Lopez that one of his favorite dishes (and thus a requirement to be considered “wife material”) was sopa de fideo, like his mom Victoria makes.

Lopez, still waiting for Vargas to pop the question after dating for a year and a half already, told PNS she wanted to make him special TGIF fideo before the 5:30 PM showing of The Lone Ranger at the AMC Montebello 10 so she put a Cup O Noodles in the microwave while she curled her hair and he watched TV in the living room of her apartment in Whittier.

Although the noodles were labeled “spicy,” Vargas, 32, told PNS that he couldn’t see himself with such an ardent pocha long-term.

“I mean, don’t get me wrong Paola is a great girl, but where does she get off trying to pass off Cup O Noodles as fideo? That’s just not right!” he said.

Vargas has reportedly already asked out his mom’s comadre’s daughter to the movies, while Lopez has accepted a position in social media at a West Los Angeles tech company and hopes to one day have a “house husband” to do all of the cooking for her.

She’s also thinking of finding an apartment in Santa Monica if she can save up the first and last.