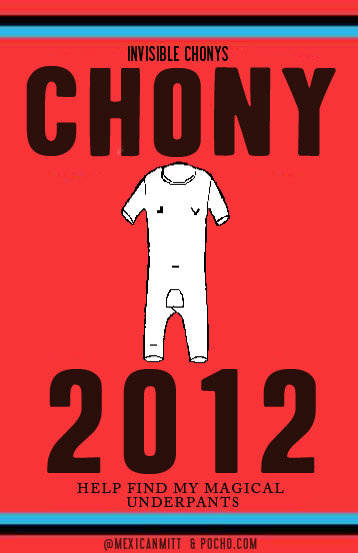 “Send me $35 a month to help CHONY 2012, help track down my Magical Underpants. Sixty-nine percent of your donation goes to CHONY AWARENESS.”

“And if you find them, please, please wash them,” he says.

Your $55 CHONY 2012 donation will get you: A Magical Abstinence Bracelet made of PINCHE CHINESE RUBBER.

“We know Mexican Abuelas invented Magical Underpants,” said Mexican Mitt, adding that, “I should know, I have like 40 abuelas in Chihuahua.”

When asked if the CHONY 2012 campaign had anything to do with the “Stop KONY 2012”, the multi-millionaire candidate asked, “Who’s Kony?”