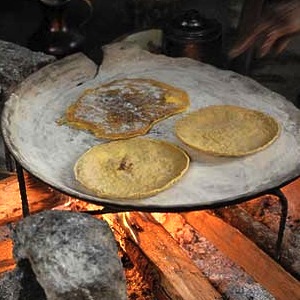 The gluten-free baked good’s path towards enlightenment started last Tuesday when dried kernels of corn, lime and warm water were mixed at area Tortillera Molina by its proprietor, Lucy Molina.

The corn was from Iowa, the lime from Yucatan, and the water from the Hidalgo County Water District.

When the nixtamalization was complete, the masa was placed in a tortilla press where it was formed into a six-inch diameter circles and transferred to an oven where it acquired its Viññāṇa. Trejo’s tortilla was but one among many in the half kilo of corn tortillas Molina sold to the teacher.

“I planned on making tortilla soup that night and saving the rest for my weekly tortilla consumption,” Trejo told PNS.

At the bottom of the stack, the doomed tortilla pondered the meaning of its consciousness and reached the conclusion that life is suffering.

“I made green chile enchiladas the following night, then chilaquiles the next two mornings,” said Trejo. “Do you know the poetry of Jaime Sabines?”

The lonely tortilla envied his peers who were being utilized in hardy Mexican cuisine. Its anguish increased steadily through the week as others were used for bean tacos, rolled up with salt, or eaten plain during the week.

After a few days, the round flat grain product realized that its self-generated angst about being “left out” was the source of its suffering. It pondered that realization and meditated.

“I made chicken quesadillas with guacamole on the side the day before yesterday,” Trejo remarked between ruminations on Mariano Azuela’s influence on Mexican literature.

The tortilla saw the educator make quesadillas, but instead of envy and jealousy, it felt peace. Through mediation it had ceased the suffering caused by envy by finding meaning in the suffering. It pondered that concept and mediated while Trejo spooned up the guacamole with bits of the quesadilla.

Last night, the 30-year-old bachelor turned on the gas stove burner, and, as designed, its flames transferred energy to the comal, heating it to 400℉.

“I wanted something simple that night, a corn tortilla wrapped in aquacate. I grabbed the last tortilla from the fridge and placed it on the comal,” Trejo recalled. He had turned on the TV previously to see “reruns from How I Met Your Mother” because “that Ted Mosbely is like me, a romantic looking for love.” He placed the last corn tortilla on the hot comal.

The last of the Molina tortillas didn’t suffer from the heat nor the flames because it had taken the path of enlightenment through right view, right intention, right speech, right action, right livelihood, right effort, right mindfulness, and right concentration.

No child was going to yell “Ama! Las tortillas’ and have a madre take it off the comal. Its maize meditations freed it from suffering from cuisine envy and any other types of suffering. The flames released it from its physical matter. It had achieved cessation of the tribulations of saṃsāra.

“The smoke alarm went off and I had to open the windows to let the smoke out,” said Trejo, unaware that the fire that caused the smoke had helped the tortilla break freed from the cycle of existence.

“I was really down. No tortillas meant it was another ramen night,” said Trejo. “And Ted still didn’t find his true love.”