The act of throwing a pie in someone’s face is not a mission to be undertaken lightly, and it’s a mission we certainly do not recommend, advocate nor encourage, according to our attorneys.

A poorly thought-out pieing plan can backfire, leaving the pie thrower to deal with unintended consequences (see video, above.) Helpful, illustrated hypertext pie throwing manuals are why Al Gore invented the Internets, and this introduction, we hope, might be of some use to you. Not you with the YOLO T-shirt. Those calmer looking people with the NO FRACKING WAY hoodies.

According to online anarchists and pie-throwing experts, there is a proven two-step approach to an effective pie throw, and also several do’s and don’t’s in considering the pie per se. Peep this info graphic:

But why pie in the first place? The sketchy-looking anarchist clowns of Clownsec (photo) say this:

Pieing, like property destruction, demystifies and undermines the power structures of our society by showing that icons and idols are not unassailable or above ridicule. It’s like burning someone in effigy, only better, because it reveals how, in this media-addled society public figureheads are nothing more than effigies of themselves, ripe for the roasting.

What does a successful pieing look like? This video of Bill Gates getting pied might give you an idea:

Then there was the time the Bella Twins (actually the Garcia sisters from Scottsdale, Arizona) get pied by fellow WWE competitors Carlito and Primo Colón. No matter how scripted it may or may not have been, Brianna and Nicole are righteously pissed off:

Meanwhile, these clowns are very detailed in their manual:

Choose a worthy target. It could be a specialist, CEO, or head of state–pie terroristshave already hit all of these on various occasions to great effect–or a less obvious quarry who nonetheless represents social forces imbued with a seriousness that must be undercut. Hitting a reporter during a live media event, for example, could send an important message…. 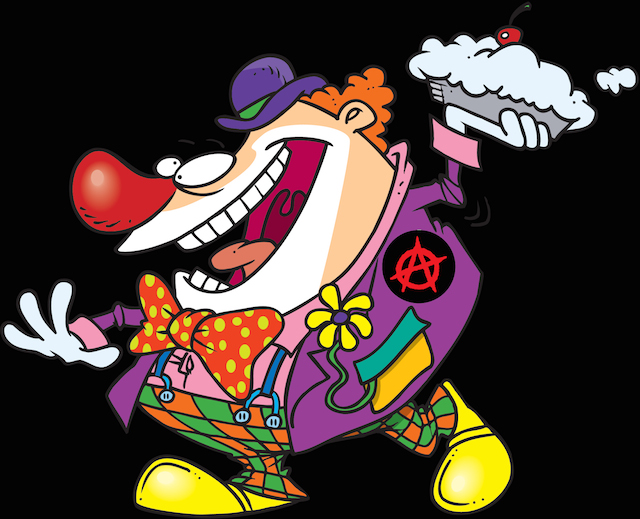