“Two hundred thousand clones are immediately available for deployment on the border” when the bill passes, a jubilant Rubio said at a Capitol Hill press conference this morning. “The minute Obama signs the bill, we’ll send in the clones!”

“I am excited that specific funding is designated for development of all-terrain armored transports that will handle the harsh desert environments of the border, along with the creation of a scientific lab at Arizona State to make genetic enhancements to Gila Monsters as environmental-friendly transportation option for the cloned agents,” Sen. John McCain (R-AZ) told reporters.

“Before leaving Congress in 2009, my esteemed Tea Party colleague Tom Tancredo placed an order for a quarter million Border Patrol Agent Clones,” Rubio noted. “He was the droid you were looking for.” 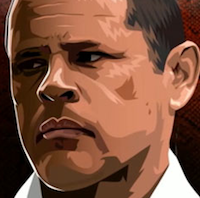 We believe that immigration reform that relies on nameless clones that look like famed Latino actor Raymond Cruz is an insult.

Rubio left open the possibility for other uses for the clones, “We can always order more clones to pick crops and build houses without having to give them the path to citizenship,” he said. “Ain’t nobody got time for that!”