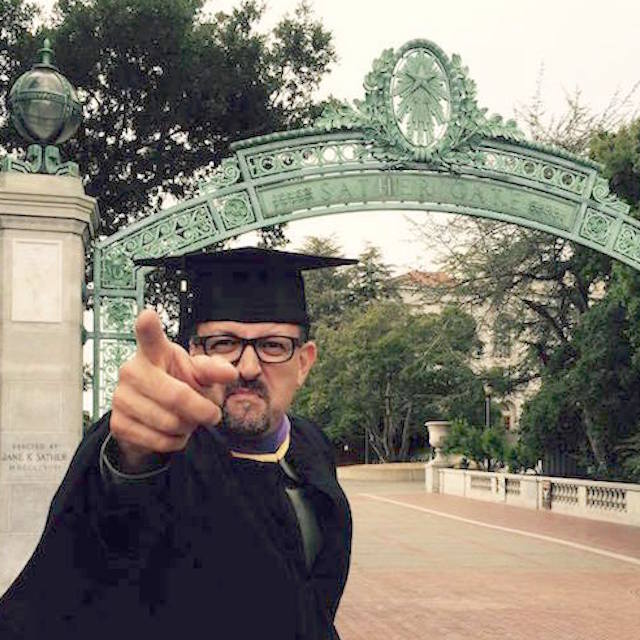 And graduates, it won’t cost you anything: how about the loudest most tremendous cheer for your families?!

Good, NOW this is sounding like the Chicano/Latino graduation! Next year, may I suggest mariachis?

I am so honored to be here to share this amazing milestone with you, and I’d like to thank the College of Environmental Design. Both of my alma maters have finally realized I’m an alumnus, I guess I made it.

I have to admit, at the reception at Wurster Hall I did feel a little out of place. It’s been so long since I’ve been immersed in Architecture. Wurster is so much nicer now! I mean, you have lasers now! Most of the professors I worked with are gone now, but I did find Jean Paul (J.P.) Bourdier, and I told him “J.P.! You look the same!” He grabbed my arm and he said, “Lalo, you have changed.”

After reading a couple of books worth of commencement speeches, I found that there’s four major mainstay commencement joke areas I must hit in my speech, so let me get those out of the way.

Welcome to the first class of Sustainable Environmental design majors (there’s like six of them), Urban Studies & City Planning, the slightly odd, adventurous-but-never-satisfied Individual Majors, and last but not least, ARCHITECTURE!

To M. Arch students, who wear blue astronaut-like jumpsuits instead of robes: May I suggest adding capes?

All of you have achieved so much. Years of procrastination have finally paid off. And you have so many lives ahead of you. But for now, congratulations on putting this life to bed.

I applied to be the student commencement speaker for the CED graduation. I didn’t win the spot, even though I had a somewhat powerful, political speech audition, in which I probably called for the hiring of more Professors of Color, and more admission diversity — stuff like that.

I promise you, I NEVER vowed that, “One day, I will give the CED Commencement Speech, I’ll show you!” But here we are. So, OK, I’ll take it.

In high school, my art teacher made me her TA, and would fill my head with visions of attending private art schools someday, like Cal Arts, Art Center and Otis College of Fine Art & Design. I didn’t know I was a poor little cholo who could not afford even bus fare to one of those high-end schools but I wanted to go so badly. Years later, Otis College of Fine Art & Design invited me to teach illustration, which I did for over two years. Another goal caught up to me.

A cartoonist named Allen Saunders once said, (and John Lennon sang it) “Life is what happens while you are busy making other plans.” I see it as the slightly less defeatist but quite not as catchy: “The best plan is being yourself.”

I came to Berkeley, but not as an undergraduate. I never would have made it here, at the number one public school on the planet. I wasn’t ready.

I barely made it into the undergraduate ranks at San Diego State University. I grew up on the border in San Diego in a series of shacks and apartments on the wrong side of the tracks. My parents were hardworking but poor and lightly-educated Mexican immigrants.

My father died in a drunk driving accident when I was 13. Even before that life at home was not easy. I endured the sunny, mellow and easygoing racism of 1970s San Diego. I didn’t have a school support system at home.

Before I completely lose you, I’d like to acknowledge that I attended my own Chicano/Latino graduation right here in Zellerbach Hall in 1990, and that in about that spot right there in the middle of the stage, my mom stood and held her beaming face when the roaring crowd acknowledged her. In about two weeks it will be the first anniversary since she passed away.

So, anyhow, thanks to both my mom who kept me fed and alive, and to artists and teachers who saw my potential, I was able to develop as an artist.

I grew up seeing how unfairly and harshly my housekeeper mom and gardener dad were treated by their American bosses, and I grew angry because of it. This grew into a desire to write and draw things that stood up for the rights of immigrants, Mexican or otherwise. The underdogs.

Drawing and creativity runs on my mom’s side of the family, and so I was able to use that to express my anger, and develop that into a semi-lucrative career of poking fun at powerful jerks and morons, and to promote social justice.

I have to say, annoying the greedy captains of industry and their political lackeys is its own reward.

Like every other editorial cartoonist, I was the cartoonist for my college paper, The Daily Aztec. My nickname at the paper was, I kid you not, “Please Forward My Hatemail.” It was the Reagan Era, and a great time to skewer conservative politicians. Almost as easy as the George Dubya Bush Years.

At SDSU I studied Art & Environmental Design, and my exposure to the architecture of Frank Lloyd Wright, Buckminster Fuller and the insane Walking Cities of Archigram inspired me to want to change the world through Architecture & Design. I applied to grad school.

I was accepted into UCLA’s Architecture program, and UC Berkeley’s three-year M. Arch program. Berkeley was farther from San Diego than UCLA, so that’s where I went. Parents, you know what I’m talking about. In my home, we have a 200 mile radius rule for college. That’s not a limit, that’s the minimum distance.

I practically lived at Wurster Hall, drafting and making endless presentation drawings. I have to say I was pretty awesome at making study models. I wish my physics and engineering abilities had been as sharp as my foam core cutting and hot glue gun skills. I was pretty badass with balsa wood and cardboard scraps. If only making functional buildings was as simple as making beautiful study models.

One of the best things I did here was to work as a TA for Lars Lerup, Professor Emeritus here and Dean Emeritus of the Architecture School at Rice University. Lars was, as they say in Sweden, “cray cray.” He is a funny dude.

One day, in front of dozens of students in our class, ED1 I believe, Professor Lerup, who would crack jokes about my Chicano identity while I cracked jokes about his Swedish heritage, drew an imaginary circle in the air with his hand and told the students: “This is what YOU know. This is your world. You students, are in the middle, and you see everything inside. Now, LALO, because he is a Chicano, he has one foot inside this circle, and one foot outside. He can see EVERYTHING in your world and everything else OUTSIDE your world!”

I was blown away by this. He affirmed my dual Chicano identity to me, but also to the whole class. It was a pretty cool experience.

So what were my valuable lessons in architecture?

Yet I did not become an architect. I went to Wurster Hall to study architecture, and came out a satirist. As the great Mahatma Gandhi once wrote, “OMFG?” (I then looked to the heavens and kissed my fingers and raised them to salute Gandhi.)

Life has other non-architecture related plans for you architects. About 50%, actually. And also for the rest of you. It’s true, they did research! And it’s OK.

On campus I started performing in front of building takeovers and constant protests. I started a sketch comedy group called the Chicano Secret Service, and also a satire ‘zine called Pocho Magazine.

At Berkeley I also met my future wife, who most days curses the day I followed her to L.A., and she’s sitting right over there with our presently well-behaved children.

After graduation, I moved to Los Angeles to try to get into the entertainment industry. Then the L.A. Riots happened, and that lead me to drawing editorial cartoons in the LA Weekly, and from that, my daily strip La Cucaracha was born.

I became a graphic novelist and New York Times bestseller, I wrote film scripts for studios, and last year was hired as Consulting Producer and Writer for an upcoming primetime animated television show which has just been officially added to the Fox TV lineup.

That show is called Bordertown and is Executive Produced by Seth MacFarlane of Family Guy, and has a record number of Mexican and Mexican-American characters, five Latino writers, three Latino producers and lots of Latino voice talent. This show is so brown it should be on Telemundo! But it’s on Fox!

Please watch it. I have kids that are all going to go to expensive colleges.

As long as you stick to what you are about inside, you’re going to be fine. Sometime plans will follow you.

Life will always throw obstacles and opportunities in your way. Some of these you should find a way around, some are to be driven straight through, like a flaming barrier in Mad Max Fury Road or some other current movie reference in which people drive through crap. Explosions will happen. Water will become worth more than gold!

So, I don’t have any words of wisdom from the point of view of an architect, other than as planners and designers, you should all strive to achieve or accommodate for social justice when you can. There’s a lot of people out there who need your help in providing for their families and having a decent quality of life.

(Impromptu rant, I think it happened here.) By the way, I just spent a weekend in the Pine Ridge Lakota Indian Reservation in South Dakota, doing cartoon workshops with kids, and I have to say it’s another world. They are a wonderful people, but this community has lots of problems and issues that need addressing, and it’s a crime the way they have been marginalized. And its within our borders of the United States. I urge you graduates to go spend some time there, or at any reservation around the country, they deserve our help. There. that’s my commercial for the Lakota people.

Berkeley changed my life. Berkeley has changed our lives, and probably in ways we can’t even imagine yet.

I started out trying to become an architect, but it didn’t work out that way. But I’m still doing what I’ve always wanted to do, which is fight for social justice. My favorite hate letter of all time reminds me of how great it is to be a political cartoonist.

One reader was so angry with me he told me to QUOTE: “GO BACK TO AFRICA.” He hated me so much he wanted me to go back to the cradle of humanity, one million years!

And cartooning does offer lessons we can all use in life, such as:

It’s guaranteed that life will mess with you, but you will be fine as long as you stick to your plan, and the best plan is TO BE YOU.

I will leave you now with something a wise old Mexican philosopher once said, “May the odds be ever in your favor.”

THANK YOU, GOOD LUCK AND LET’S ALL GRADUATE!

POSTSCRIPT: Not everyone liked my speech!  This is from my page on Facebook:

COMMENCEMENT SPEECH HATELETTER O’ THE DAY(My reply first)Wow, I have NO idea what you are talking about. People of… 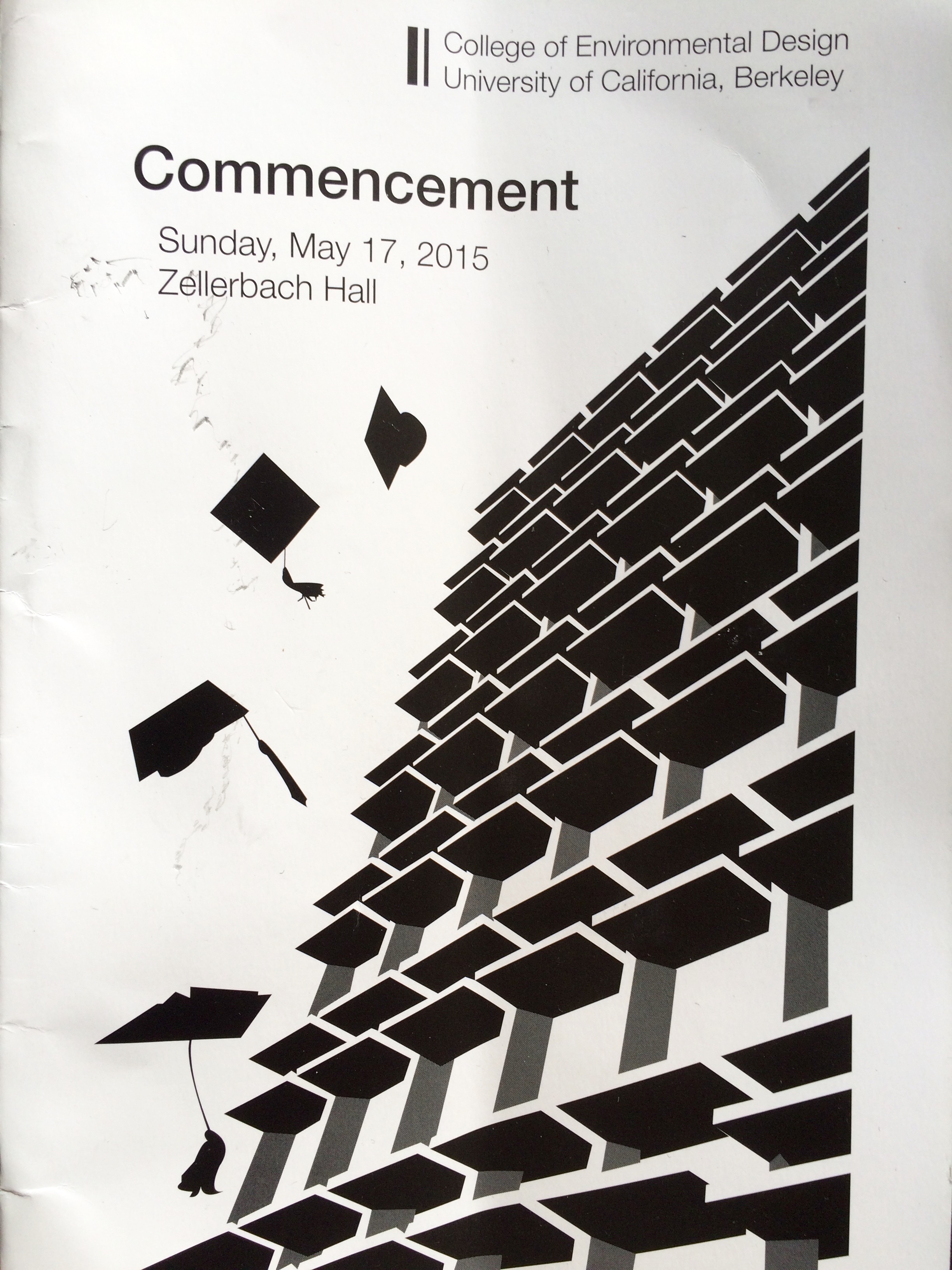