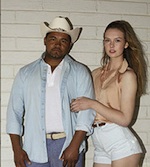 Blonde joke: Look what I just bought from a bag of oranges!

The also muy funny runners up were:

Everyone else wins our undying gratitude, and the promise of another contest! Congratulations and felicidades! Stay tuned for our next CAPTION THIS POCHO PHOTO, coming soon!

Here’s the original story with all the entries.