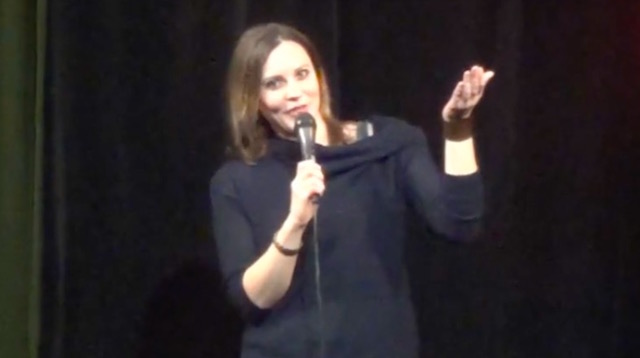 A few weeks ago, my aunt asked me to do a Skype Q&A with her high school students in Peru. She teaches a course on race and racial profiling and she thought it would be interesting to show her class my stand-up comedy dealing with racism then discuss the differences between American and South American racism.

However, the timing could not have been more biting. Just prior to my Skype call, news of yet another black man, Alton Sterling, slaughtered by police officers, began to circulate.

My aunt said to me, “the kids have a hard time understanding American racial profiling, for instance, why do cops target black people?”

Anyone from a Latin country is accustomed to a very different sort of police brutality. Common wisdom says cops only stop you when they want a bribe. So, why would cops target black people, let alone kill them? What is the point of that?

I started off saying, “Well… after the abolishment of slavery, black bodies were no longer governed by capitalism and lost their monetary value…” Their little faces squished and looked so confounded, I had to simplify.

“Being black in America, people assume you’re a criminal. That is the stereotype.”

They ask me what other forms of racism black Americans face.

Though I in no way felt qualified to answer that question, I listed some of the most prevalent examples: white people crossing the street when they see you approaching, not getting called in to job interviews, being declined for loans or credit, being accused of stealing, being targeted and murdered by the police, being worth less than everyone else.

I felt I could do this question no justice. I had not lived these things. I didn’t even begin to explain the treatment of black women, once a financially viable vehicle for the creation of slaves, degraded and cast as the sex potent welfare queen.

However, still flustered by yet another black death, I said very calmly, “Because black lives are worth less than white lives, cops can just kill black people and historically nothing happens to them.” The words felt just as horrifying coming out of my mouth as the look on their young faces. However, this is the message America sends every time a black life is shot down by police with no conviction or retribution.

“Is that the main difference between Peruvian racism and American racism?” they asked.

“Well,” I responded, “American racism is very violent. It has always been very violent. Where in other countries, violence is often politically charged, in America, we target violence towards each other.”

The words flowed from my mouth before I had much time to even process them but it’s a pretty ancient concept: divide and conquer. It is a benefit to government to keep us separate, keep us fighting amongst ourselves, distract us with hatred. Dr. Martin Luther King Jr. addressed this issue many times. In modern day politics, “us vs. them” has become the norm. But we don’t have to subscribe to that.

However, in America, we feel a strange helplessness. Despite being “free” we also feel beneath the system– a system that seems untouchable, unchangeable. So, violence gets redirected towards a more vulnerable target, whether it be black Americans, immigrants, the LGBT community, etc.

The kids asked me (as so many people have) if I identify as white or Latina. I identify as Latina but I am white– I realize to the world I am white and that comes with an abundance of privileges. However, at times I face the pressure (usually from the white camp) to “pick a side.” Exactly what am I picking a side for? An imaginary conflict created by a corrupt system to detract attention from those in power? I would rather step-down from the racial hierarchy. I would rather obliterate the racial hierarchy.

The morning following my Skype talk, I was still sifting through my emotional catalogue, trying to figure out how I felt, when I heard about Philando Castille’s murder.

Maybe it was the summer heat, maybe it’s because I haven’t had a real job in over a year and I’ve been living in a roach infested apartment with no A/C and I’m constantly in a bad mood, but the minute I heard about Philando Castille I wanted blood.

Kill the cop that executed an innocent man in front of his family. Make an example of him, basta, enough.

I have been an outspoken opponent against capital punishment since I was 14 years old. However, at that moment I was consumed by anger– racist men only speak the language of violence. Speak to them in their language, let them know the fear of having your life on the line, the fear every black person feels on a regular basis.

As the day progressed, my heart softened to reason. Statistically, capital punishment has never deterred violence. States with capital punishment still have the highest rate of murder and violent crime– not to mention the ripple effect violence creates. It would be like trying to kill a jellyfish by slicing it in half, you just end up with two jellyfish. The only way to really stop jellyfish from overpopulating is to stop the conditions that allows them to breed in the first place. Same with violence.

Soon after came the shooting in Dallas: five officers dead at a protest, nine wounded. Ultimately, I do not wish death upon anyone. Not innocent black men, not cops doing their job, not even alleged snipers or racist murderers.

A few years back, I had a run in with the law myself. I was on the border of Little Haiti in Miami, a neighborhood undergoing gentrification (a whole other big subject, yes). I was visiting a friend in her brand new luxury condo and being the New Yorker that I am, decided to walk over to a nearby pub.

As I was crossing the street, a cop stopped me. He started asking me questions– where I was going, where I was coming from. Here I was, a white girl walking around a black neighborhood at 11 o’clock at night. It struck me almost immediately: he thinks I’m a prostitute. Just then, I turned my head to find I was completely surrounded by police officers.

I kept my cool but I was terrified. I knew that if they decided I was a prostitute, my life essentially had no value. The most vile human beings take out their anger and frustration on the most vulnerable among us. They could beat me, rape me, murder me– if they decided my life was worthless, in there minds there would be no consequence. I imagine this is as close to feeling black as I will ever get.

Sometimes, I tell white people this story and they think I’m being crazy. “He was probably just worried about you and wanted to make sure you’re okay.” If he was worried about me, why did he start off with an interrogation? Why didn’t he just say something like, “Hey, are you lost? Are you okay?” not “Hey, where are you coming from? Oh yeah, who lives there? Who were you visiting in that building?”

This is my biggest frustration with some white people (ahem, all lives matter people). They’re tone deaf. For the life of me, I can’t tell if they’re simply incapable of seeing the obvious or if they just chose not to.

Most recently, Miami police shot unarmed therapist, Charles Kinsey, who was trying to help his autistic patient. Kinsey was laying on the ground with hands up when he was shot. If you thought I was crazy before, I am certainly feeling crazy now– WE SHOULD ALL BE FEELING CRAZY.

A gun-carrying police officer should not feel entitled to assign value to another human. And the fact that they do should scare the crap out of everyone. But statistically and historically, black bodies bear the burden of this, black bodies have been assigned the lowest value so it’s easy for the rest of us to ignore. However, as the late Elie Wiesel said, “Silence encourages the tormentor, never the tormented.”

Back to the corner of Biscayne and 54th. I calmly explained to the officers that I was staying with a friend on the waterfront and rather than drive four blocks and re-park my car, I decided to walk to Churchill’s. The argument was sound, his face softened. He made eye contact with the other officers and waved his hand in an “it’s okay” gesture. The fortress of cops enveloping me broke apart and everyone went about their business.

“Ok, thanks.” Though, safe from who, I wondered.

Before signing off with Peru, the kids asked me one last question, “What can our generation do to end racism and racial profiling?” The answer felt so deceptively simple: “Make friends with everyone, get to know everyone, respect everyone.” But at the same time we have to question ourselves, question our actions and what we’ve learned. It’s not as easy as it sounds.

I feel incredibly blessed to have grown-up in a diverse community, a community of people who called me out when I was being ignorant or racist, people that helped me grow and evolve. Not everyone is given that opportunity. Not everyone wants that opportunity. However, remember always your life is not worth less. Your life is precious and valuable and deeply important. Though sometimes it feels like you’re drowning, keep defining yourself. One day, the rest of us will have to catch-up.

[Elise, known to her legions of fans as @BUTTRONICA on the Twitter, first published this on her blog.]