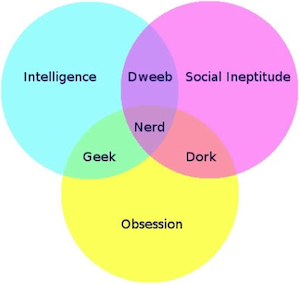 Latino nerds are into both American and Latino popular culture. Latinos are part of United States of America.  This standard is not based upon documented status or the ability to speak English.  It not based upon the ability to bleach one’s hair a lighter shade of blonde.  No, Latinos are part of the nation because we have produced something more profound — Latino nerds.

A Latino nerd can usually discuss both whether “Han Shot First” and the awesomeness of El Santo Luchador movies. They discuss which Star Trek series had the most Latinos (Chakoty and Torres on Star Trek Voyager) and whether Sábado Gigante was better than Siempre en Domingo (Answer: the latter was best because they would take the show on the road). Still, the world of Latino nerds is so vast some would rather discuss adopting Linux as an operating system verse using Windows.

Like many nerds, Latino nerds were the smart kids in school. Your author is a Latino nerd — big surprise there. My revelation that I was a Latino nerd occurred in grade school when they started pooling kids in different groups: the smart kids; the average kids; and the cholos. As part of the smart kids group, I told by the cholitos, “Eres un nerd.” The cholos were my friends, so it was both a sign of ridicule and respect. These groups tended to be static. A smart kid could go down into another group, but climbing into the smart group was difficult.

As Latino nerds entered high school they were given great responsibility — academic events. The jocks had football or basketball, the Latino nerds had Academic Decathlon, Odyssey of the Mind, or the high school quiz show. The stakes were even higher when competing against the white nerds from the rich schools. A victory against them was a triumph for your barrio and the cholos. A defeat made you try harder the next time by reading one more book, learning one more math formula and playing another game of trivial pursuit. But, Latino nerds weren’t all school work. We had time for marching band and selling chocolate bar for the trips.

All this cross-pollination with other Latino nerds created the fascination and obsession with nerd topics. One learned how to speak Nerd Talk with a Latino accent. This was important since after high school, Latino nerds ventured to college, where there few of them but a great number of other ethnic nerds. But since nerd talk is universal, the gap between cultures was bridged with nerdy discussions of computers, gaming, science fiction, and life.

Latino nerds are everywhere, but nowhere. Latino nerds are doctors, lawyers, engineers, teachers, writers and politicians. Many have adopted the costume of the work professional wearing the dark Brooks Brothers suit or the sensible pumps. A few have become fashion forward wearing the latest Manolo Blahnik shoes and reading Vogue for the season’s latest trends. Some have evolved into the Hot Latino Nerd and some still wear plastic eyeglasses from Gual-Mart.

It‘s a universal truth that a nerd won’t reveal themselves unless they are comfortable showing their true nature, usually in the presence of another nerd. If you want confirmation about a Latino nerd for friendship or love, well, just say something nerdy or forward them something like this: