AJUA!! I am Mexican Mitt Romney, and I am here to clear the record on the GAY MARRIAGE.

Contrary to reports by ABC News and Perez Hilton about Barack Obama being the first president to approve of same-sex marriage, I invented it, and now Barack Obama is hogging all the credit! If you ask me, Obama is spiking the gay football! That is wrong! Everyone knows gays play tennis and hacky sack.

Now the gays are all running around and shrieking like the end of an episode of Ru Paul’s Drag Race just because the PINCHE North Carolina DOUBLE NEGATIVE GAY MARRIAGE Proposition that won this week. HIJOLE! Such drama queens!

In North Carolina it just means that Jethro cannot marry Jethro, but he can marry HIS COUSIN ELLIE MAE! Ajua! That’s what I call FREEDOM! 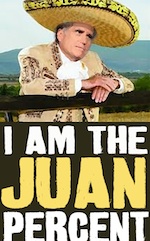 Well, now all the homosexual Hollywood types are going to give even more money to PINCHE OBAMA because now they think they can gay marry GEORGE CLOONEY or JUSTIN BIEBER. GET REAL, BITCHES! I firmly believe in GUEY MARRIAGE, isn’t that good enough for you?? If it wasn’t for guey marriage, I never would have been able to marry all my viejas. Marrying lots of viejas is a tradition, so this makes it sanctified.

We Severely Conservative Republicans and especially the Log Cabin Republicans, have all long agreed that Same Sex Marriage is wrong. We pay them to say so. We don’t support the gays marrying because that would ruin HETEROSEXUAL MARRIAGE.

And now I suspect that gays must have been married somewhere, because they ruined all four of Rush Limbaugh’s marriages. Also Newt Gingrich’s three marriages. Sneaky gays!!!

So if you want to control what all the gays do, vote for me, Mexican Mitt Romney, the candidate who invented gay marriage, the Internets and the Dorito Shell Taco.

And I also invented John Travolta going to the massage parlor nine times a day. Ajua!