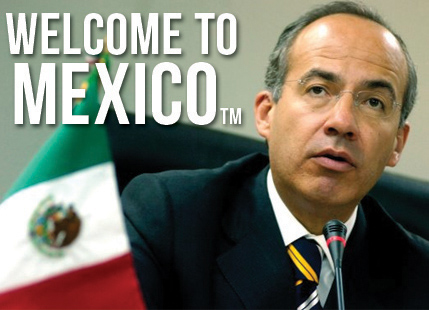 I was once reading a delightful conversation online between inbred racist trolls on their favorite punching bag, Mexico; they joked about making Mexico the “51st state.”

One idiot brilliantly observed that this genius plan might not work because “I think they have states, too.”

Wow. Yes, Mexico has 31 states, and one Federal District,  presumably where the Federales park their horses. (A little backwater ranchito called Mexico City.)

But Mexico, as it turns out, also doesn’t have the name “Mexico.”

On its independence from madre España in 1821, Mexico became the Estados Unidos Mexicanos or “Mexican United States.” It’s said that  this United States-like name inspired the also freedom-loving people south of the border, and the name became official in 1824.

Not that anybody except government officials and journalists call it los Estados Unidos Mexicanos. Mexico’s acronym is no catchy and chanty “USA! USA! USA!” but “EUM.” EUM? Uhm, lame.

So lame-duck President Calderon wants to trim the fat and name it “Mexico.” Why not? I bet Calderon is a huge fan of Snoop Dogg, who just changed his long ass name to “Snoop Lion.”

So why not “Mexico”? Even though many have said Snoop Dogg, er LION, took the time to change his name because he didn’t have pressing national security problems to deal with, like civilian casualties due to an out-of-control drug war, or rampant drug use. Well, the war thing, anyway.

So that the Mexican government doesn’t have to just rubber-stamp the name change, or look exhaustively through a baby name book, I have some suggestions to for other possible names.

Whatever you call it, Mexico will continue to be the beautiful, colorful yet troubled country that is no danger of becoming “the 51st State”.