In 1998, LA’s Kid Frost (Arturo Molina, Jr) and Mexican punk rappers Tijuana No teamed up for a history lesson about the so-called border imposed on Aztlan by the force of arms. SPOILER: We’re gonna get it back! [NSFW F-bombs.]

The other day I woke up en la Montaña
‘Cause I was dreaming about Lopez de Santana
Feeling suddenly in my throat un veneno
This mother-fucker gave the güeros our terreno
We wouldn’t mind to share it with los gabachos
It was too late when we found that they were bien gachos
Books at school tell that they always been decentes
They killed, stole, raped and kicked out nuestras gentes
With a Jump, I sat down on una silla
Asking my self where is Pancho Villa?
Since we already got a full scale invasion
Carryng as weapons: culture, work, force y razón
It won’t be easy, it’s gonna be un infierno
The Ku Klux Klan y el pinche gobierno
Fascists pigs they’ll try to kill you primero
The most important thing for them, es el dinero

Listen to my heartbeat shake the street
Now I got my cuete loaded and I’m looking for Pete
Mr Wilson don’t u know that we can’t be beat?
Your little prop me tried to stop me but I came with heat
And u can’t keep a vato loco like me down
And I proud of represent my color brown
I be that crazy vato loco from the land of Aztlan
Step to raza once again it’s on
And I’m down for the plebe in my ragtop Chevy
Hear the voice of the frost and get your AK ready
‘Cause freedom got an AK I stand my ground
Look and load and I fire away
You say we crossed the borders shit the borders crossed us
It’s automatic plus every time I bust
So just get back or get a head crack or join the ranks
Of the razone and take it all back
We’re gonna get it back! We’re gonna get it back

We’re gonna get it back

(Editor’s Note: Last we checked in with Kid Frost — March — he was in the hospital fighting cancer. He’s back out there gigging now, and played with 2Mex this past weekend. ¡Orale! ) 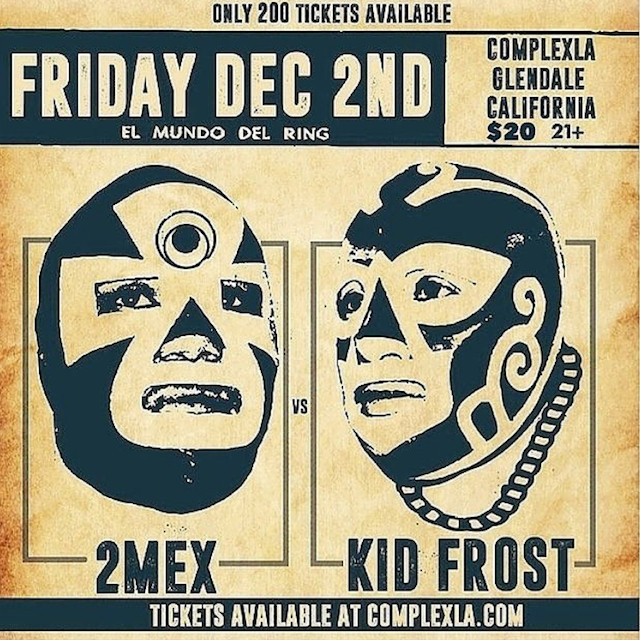