The Ovarian Psycos bike through East L.A. and Boyle Heights, women of color patrolling the streets to show their power, for themselves and all las mujeres.

Ovaries so big we don’t need no fuckin’ balls!

They fight against both sexism and racism, the feeling that many of us have felt throughout our lives that we aren’t important, that we aren’t good enough, that we deserve the feeling of shame that society likes to toss our way, the idea that the ruca should just make a taco and shut the fuck up. The Ovas say hell no to that.

To walk or bike alone after dark anywhere in L.A. is considered dangerous and foolhardy.

I know, because I do.

But these sisters travel together and make a statement of their mere presence and unwillingness to obey the orders stay home where it’s “safe”. Sisters protect and support each other. Children of trauma band together to make sure their oppressors know they can’t be kept down. Pride.

It’s no joke, I know of a woman who was attacked and assaulted in Boyle. The danger is as real as it is nebulous.

It’s too real and in more places than you might expect.

But the Psycos do not allow this to deter them. Many people expect activists to know exactly what their goals are and have plans on how to achieve them. Those critical of activism usually point to this lack of certainty first as if not knowing the ending denies the legitimacy of the struggle.

The Ovas don’t, which is one of the most beautiful things about their movement. They are still figuring it out and open to changing their ideas and mindset which I think is a much more potentially successful way of going about changing their lives.

They follow in the footsteps of the Chicano/a movements of the past and light up their own path.

You may be able to stream the PBS documentary on the mujeres via the PBS Independent Lense website, depending on your location. 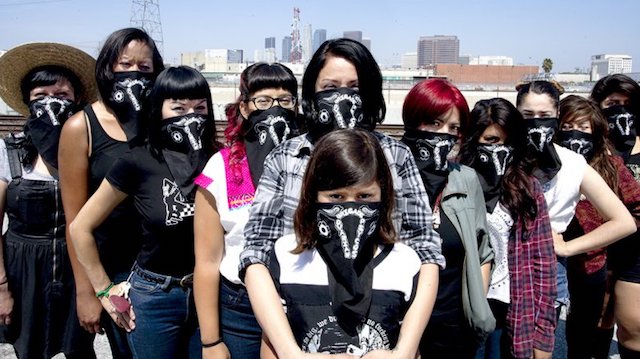