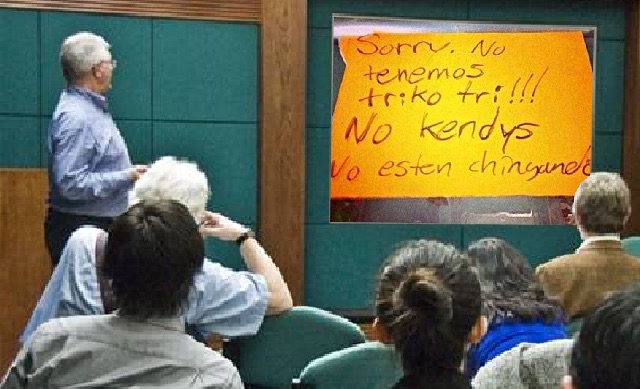 “The idea was to create some foundational principles and ground rules for our people’s language,” co-organizer Lourdes Cervantes-Borges of the Professional Organization of Chican@s Oppressed by Society (POCHOS) told PNS. “We wished merely to memorialize those rules in a book of proper Spanglish Style, a Estronque y Blanco if you will, but then these know-nada nacos had to get involved.”

“No manches, son puras pendejadas! I ain’t down with all of that academic bullshit,” countered East Los delegate-at-large Oscar “Mocoso” Chavez. “Nuestra lengua is from the streets, and I ain’t talking ’bout that chingon taco troka on the corner of Beverly Boulevard.”

And the systemization and regularization of Spanglish grammar was the last thing one angry El Paso attendee, Xicocotentl Taharamuni (the Xican@ formerly known as Jordan García), wanted:

I cannot believe that these so called Xican@s would even consider acknowledging this bastard tongue as the language of our people. Before the Europeans invaded our land, massacred our people, raped our women, and destroyed our gods, we had a sacred language – ¿Campa in cuitlacalli?* We should reject the oppressors’ languages in order to find our true voices, hidden across the ages and preserved as the sacred flame of our collective consciousness.

One conference “auditor” (“Don’t call me a participant; I shall not participate!”) had another gripe.

“Yes, I agree, but if you were truly down, you would reject the use of the imperialist alphabet, like I have proposed,”

The largest delegations, from Califas and Tejas, could not just get along.

Ramiro “Ram” Garza, jefe of the Tejano delegation from La Joya, was especially adamant about which words in a Spanglish sentence must be in English and which must be Spanish, and when new terms could be invented blending both languages.

“N’ombre, this whole thing se ha vuelto loco, these people don’t want to understand, no les entra lo que les digo. Asi no se hacen las cosas, and they know it. No mas se hacen pendejos por gusto, I mean how else do you ‘esplain it?” he said.

Doña Luisa Tovar of Santa Ana, California, was concerned about bullying from the “pinche Tejanos.”

Cooking show host and POCHO Food and Gwine Editor Tia Lencha had big hopes for the conference, but ended up with the sads:

Según, I was going to be the key note espeaker. It was so hard to understand all the peoples that talk like me, but I was going to find a new novio. What a gwaste of bus tokens.

Protestors outside the conference, held at the Sierra Michelada Motel 6, loudly voiced their dissatisfaction with the goals of the project.

“First they steal our jobs, and now they’re stealin’ our language,” shouted septuagenarian protestor Elaine Whitman. “Why are they trying to mess up English with all them Spanish words? I like the English that Jesus spoke to His Disciples, it was good enough for them and it should be good enough for these heathens!”

“I’m just so offended that people would try and degrade a language by executive committee order,” remarked Blanche White, a local radio host. “This legitimizes unlawful uses of both English and Spanish.”

“This is just amnesty for illegal grammar?” said Gerald Hawthorne, a self-described captain of the “grammar militia.”

“What part of illegal don’t these people understand?”

*Translates to “Where’s the toilet?”

Tia Lencha, ElEresNerd and Professor Equis contributed to this estory.