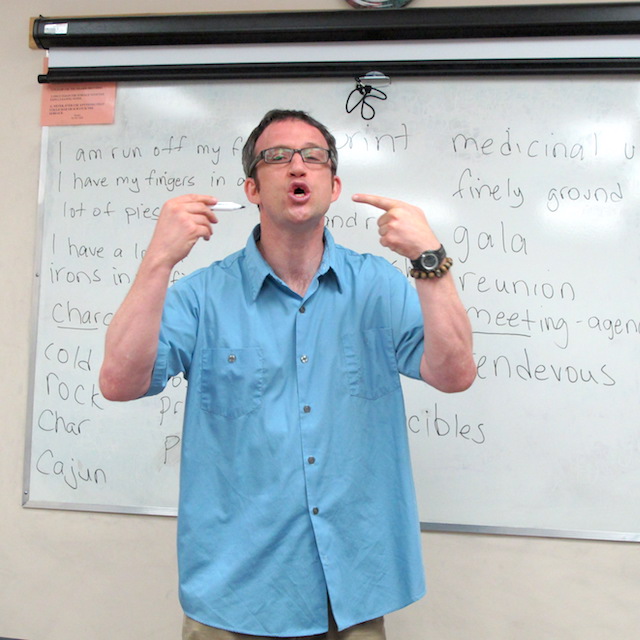 The group of six, who requested their names be withheld, filled out the survey about their teacher after complaints were filed about the quality of classes he was providing. A big part of the problem, one student explained, was McNutt’s sartorial choices.

“Every five seconds he’s grabbing his Ropa Americana and pants so they don’t fall down,” one student said. “Is it school policy for every teacher to look like a poorly-dressed Mormon missionary?”

The students also complained that McNutt loves to talk about his travels and weekend parties, which cuts into the class lessons, they said. Last week, he lectured for 25 minutes about how to do a beer “power hour” and presented a slide show about which Rasta sells the best weed in Puerto Viejo.

“All he does is talk about how ‘tuanis’ his beach trip was, or how he puked and rallied at a party,” said a 46-year-old student who lives with his parents in Alajuela. “I don’t want to learn where to get the best creepy weed in Limon. I want to know how to correctly pronounce the word yellow so that people don’t think I’m saying jello.”

When asked if they’ve told McNutt this, students said they would never consider something so audacious.

“No way, man! That would really hurt his feelings. We’d rather just tell everyone behind his back and hope he finds out another way,” a student said.

When asked about his teaching practices, McNutt said his favorite part of the group is their obvious desire to learn cool English sayings to use at parties and the amount of interest they show in him.

“The fact they ask questions about my life shows me they enjoy the class,” McNutt said as he struggled to find bus change in his deep pant pockets. “That’s why I do this job, you know? To make a difference. I mean, that and living the true expat dream in Pavas.”

“I honestly think they enjoy just shooting the shit more than working on grammar,” he said. “I mean, would you rather have a cool teacher or actually learn the difference between effect and affect?”

Despite the excessive complaints, the class still emphasized they are not requesting a teacher change.

“It’s sort of a lesson in cultural ignorance, which is fun to witness firsthand,’’ one student said, as she posted “Que calor, verdad?” on her El Face page. “We all enjoy the class, it just wouldn’t hurt to see him gel his hair or wear a cool Aeropostale shirt every now and then to appear more professional.”

On a positive note, students said McNutt’s strongest qualities included his legible handwriting on a whiteboard, his ability to teach through a hangover, and how convincing he is when making up explanations for grammar rules he obviously doesn’t understand.

Gracias to PNS News Partners El Pejibaye for this dispatch and photograph. All rights reserved.