(PNS reporting from NEW YORK CITY) Tia Lencha, the homemaker and divorced mother of one who stars in the homespun internet hit “Tia Lencha’s Cocina,” is suing Mattel over its “Mexican Barbie” doll, seeking $750,000 in damages.

Tia Lencha’s federal lawsuit, filed in New York Monday, claims the toymaker is “engaging in the unauthorized use of (her) wardrobe, likeness, image and attributes” as a woman who wears Mexican folkloric dance outfits for no apparent reason.

Tia Lencha never gave Mattel permission to market the doll or use her endorsement to promote it, according to the filing.

The suit says that Tia Lencha has cornered the market on being unrealistically Mexican and that the doll “captures the essence of the stereotypically stereotypical Mexican lady as well as her sideways ponytail and flower adornment on her head.”

A Mattel spokesman told PNS the company “licensed the rights to ‘Mexican Barbie’ through the appropriate channels.” Mattel’s attorney, Kay Meerda, did not respond to requests for comment.

Tia Lencha’s suit seeks damages in excess of $50,000 for each of 15 alleged violations of her right to control her public image, likeness, and personal business.

The Vintage Ken in Mexico doll that is sold along with the Vintage Barbie in Mexico doll “is claro que si, my mijo’s daddy, and that eskank he’s with is the eskeleton lady he married,”  she said in an interview.

These additional characters, closely identified with her,  she alleges, have been taken directly from her blogs where she discloses personal details of her life while preparing Mexican recipes. She is demanding a jury trial. 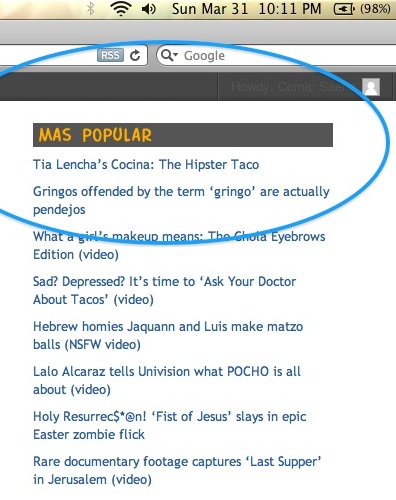 Tia Lencha also noted some inaccuracies with the accessories Mattel chose for the doll.

She would have preferred a plastic cooking spoon “to give that pendejo Ken a coco in the cabeza with” and a margarita “to drink a course!” as her accessories.

“I have hundreds of fans,” Tia Lencha said, “and every time mijo types my name in the Google my pishure appear like magic. Mattel is ripping me off because I am famus.”

For one day last month, Tia Lencha’s recipe for Hipster Tacos was the most popular story on Pocho.com.

“Mijo took a what you call it? Screen chot of it,” Tia Lencha said. (Photo, right.)

Apparently, Tia Lencha’s fame has caused her other legal troubles.

A tourist from Kansas visiting New York recently filed assault charges against her for repeatedly hitting him over the head with her purse. Tia Lencha told PNS that she was “getting out the 2 Train and crossing the estreet when some pendejo reconize me and he estart to taking pisures of me.”

In the police report, filed in Brooklyn, the tourist from Kansas stated that he was actually taking a picture of the Arch at Grand Army Plaza, which has been a National Historic Landmark since 1975.