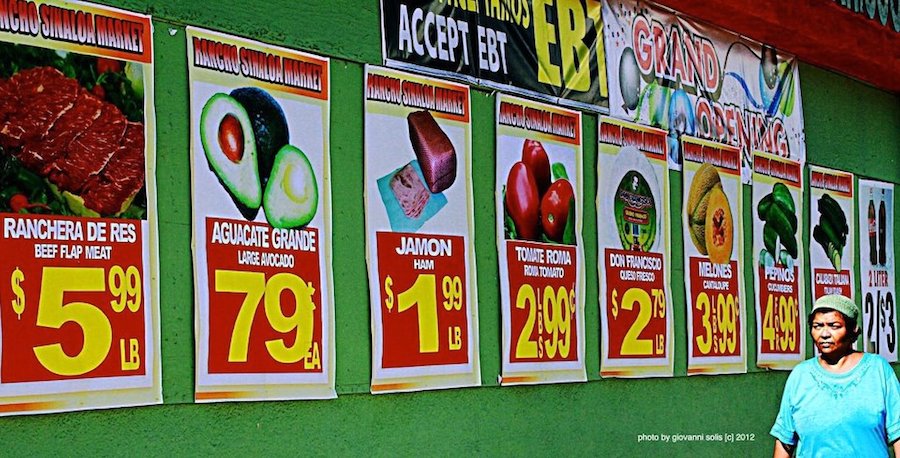 “The music was very loud. Mi viejo couldn’t hear me telling him that maybe we should go to HEB instead,” Isela told PNS. “We walked slowly as the music kept trying to push us back towards our Silverado.”

As closing notes of the modern-day classic faded, the Garzas thought they were in the clear when “the rich accordion sound waves from Como lo Hare’s finally pushed us back a couple of steps,” said Alcario. The Emilio Navaira standard “is good at a cookout con familia and a couple of Bud Lites, pero at that loudness it becames distorted.”

According to researchers at the University of Texas Rio Grande Valley, “the typical Mexican grocery stores had decibel levels of 90 decibels when its public address speakers were tuned to Spanish radio and 100 decibels when playing banda.”

For comparison, 90 decibels is the typical level of a loud lawnmower. When a Spanish radio station is on the premises, the decibel level averages 140 decibels. That is the sound of a jet taking off. And the level when your ama screams at you to check on the tortillas. But unlike tu Ama’s yell that last a few seconds, the radio station promotion lasts two hours, more or less.

The Garzas powered through the sonic waves and avoided the temptation of a free Radio La Chingona T-shirt to enter the store. “We were lucky. The next song was El Sinaloense. I recognized it and pushed Alcario through the door,” said Isela.