Not all people from Arizona are stupid racist dumbasses, but the two young women starring in the now-infamous year-old Racist Arizona White Ladies video sure are. It was reposted recently on YouTube and viewed over 1.2 million times. Throughout this poorly-lit hate flick two young female Arizonans cheer on the anti-immigrant law SB1070, which has since been partially gutted by courts, and engage in racist name-calling and vile stereotyping, and issue horrid violent threats to their brown-skinned neighbors.

If you want a textbook example of why racial hatred should not be codified in laws, this is it. Don’t you think they felt empowered after a whole state government, and a famously bigoted porkish sheriff were wrongly allowed to racially profile brown skinned-people in Arizona?

Countless angry response videos by pissed-off pochas and pochos appeared, including a hilarious one from the webseries Undocumented and Awkward, their video is Episode 9

(See the whole series and more at  DreamersAdrift.com )

And today, the alleged apology video has arrived, filled with excuses about being drunk, and being ignorant idiots and not knowing that posting a video on the Internet might be watched by a million people. 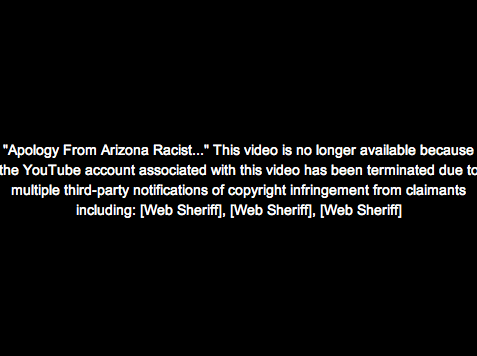 In the pleading apology video, the seemingly regretful “ladies” even make the cliché claim that “they have friends that are Mexicans,” and even have Mexican family members, who were horrified at their racist video rants, worthy of a KKK slumber party.

Apparently they caused a lot of grief to Arcadia High School in Scottsdale, AZ, which reportedly canceled a dance and increased security after it was rumored that the hater vidiots were from that school. (The school principal claims they are not in this just released statement.)

I hope their brown “friends” and their presumed Mexican-by-marriage relatives slapped them with big sandy Arizona chanclas. In their apology video, they claim to fear for their lives, and at the very least are sorry that they aired their vile outrageous racist views online. These muchachas are lucky they don’t have a brother-in-law named Machete.

They are in hiding, mostly behind horrible video quality and dorm room lighting. Judging by their apologies to the whole world, they might have learned that there is life outside of a gated community in Scottsdale. (Whoops, didn’t mean to stereotype!) I also hope they learned that racism in just plain wrong, and that smearing a whole ethnic group, whether it’s undocumented immigrants or middle-class Arizona white girls, is wrong no matter how many YouTube hits you get.