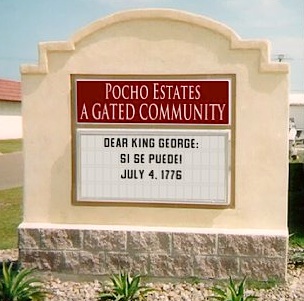 FIREWORKS: Mission Pocho Viejo American Legion Post 536 once again presents their Annual Fireworks Extravagonzo Wednesday at sunset. This year the pyrotechnics come from Zamboni Bros., new to California, with their presentation Hella Hockey Holiday – a tribute to the Estanley Cup World Champions, Los Reyes de Los Angeles. Moms: bring your blankets and sit the kids on the grass at Sotomayor Stadium. Dads: Do NOT bring your own fireworks.

INK AND DRINK: Two businesses in the El Rancho Pocho Downtown Historical District are getting together for a patriotic combo deal that’s hard to beat. Get any flag or patriotic tat at Inky Dinky’s House of Pain on Porciuncula Place Saturday through Monday and Inky will slide you a $10 pre-paid bar tab for the Loco Lounge next door. And guys, if you like thick chicks, you’ll love new tattoo artist Salma’s Fernando Botero-inspired portraits of your true hyna, right over your heart.

INTERFAITH PICNIC: The families of Saint Pocho’s Church, Pocho-Sinai Reform Temple and Masjid Pocho Islamic Center invite you to join them for a meat-free Family Friendly Food Truck Party at East Pocho Presidio Park Wednesday from 11 AM to 3 PM. There will be something delicious for everyone (and nothing to offend anyone) with offerings from local favorite gourmet food trucks