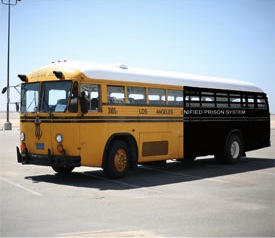 Under the plan, the school system would immediately lay off all its teachers and replace them with prison guards. The CDCR claims that within two years, the graduation rates and proficiency levels of inner=city schools would double. At the same time, taxpayers would save billions through efficiency, since guards would be able to identify troublesome students right away and switch them seamlessly into the prison system.

To show their commitment to the proposal, the CDCR showcased a new revamped bus (photo, above) which is part public school bus, part prison bus.

The hybrid bus would offer an additional way to save millions of dollars by combining transportation of students and inmates — students in the front, inmates in the back.

While the proposition to integrate these two ideologically contrasting, yet intertwined, departments is being hailed as an ingenious proposition by conservatives, the idea has sparked intense controversy and outcry by activists and citizens.

Mary Alatorre, a spokesperson for Californians United for a Responsible Budget (CURB), told PNS, “This idea makes absolutely no sense; that is why I am especially concerned that it can succeed.”

Many individuals share similar sentiments and add that the proposal could have devastating effects on the education of California’s youth. Conservatives, however, have asked people not to jump to conclusions.

“Just wait a minute here,” said James Crow of the Conservative Center for Higher Education. “The education of our children is our number one priority, let’s get that straight. Every unbiased political expert we’ve spoken to believes that the quality of education would not decrease under this proposal. In fact, computer simulations show that our kids’ brain size would increase three-fold under the oversight of the Department of Corrections.”

Crow believes a bill will be introduced into the state assembly within the next six months by Republicans. Whether or not it can gain enough support is yet to be seen, but given the current state of education in California, coupled with the budget mess and questionable leadership, it wouldn’t come as a surprise if this latest whacky proposal becomes law.