Mystery of the ages! You won’t believe what this actress and flamenco guitarist said! The one weird phrase that turned a Spanish ingenue into a superstar! I never expected I’d react like this when watching a video from Oprah! When this blonde chica began playing, the audience gasped!

Charo fans: You know you’ve been waiting for this. Was it worth the wait?

If you thought Charo’s trademark “cuchi cuchi!” was even remotely sexual, the actress is about to take your mind out of the gutter.

The flamenco guitarist known for her appearances as April Lopez in the long-running comedy show “The Love Boat” is the latest star to be featured on OWN’s “Oprah: Where Are They Now?” series.

Charo, 63, sat down for an interview in her Beverly Hills home and spoke about the origins of her iconic catchphrase.

“What cuchi cuchi came from is such a disappointment for everybody when they know because everybody thinks that is sex,” Charo said. “Cuchillo (knife in Spanish), that was the name of my dog. He was a mix between a St. Bernard and a pit bull. I make a joke about that. First he bite you and then he run for help. But I call him “cuchi cuchi.”

The trademark “cuchi cuchi” was often complimented with a pelvis thrust, but Charo explained that not even the move was intended to be sexual.

“He have a problem in the back so when the dog wiggle, he don’t wiggle like a dog, he wiggle up front, up front I swear,” Charo said as she showed the cameras. “Never in my mind was sex. Cuchi-Cuchi showed me the way to the bank so thank you very much everybody.”

The Spanish star and Colombian actress Sofía Vergara have often been compared due to their quirky but sexy personas and thick accents. The comparison, however, has been graphically repudiated by Charo. 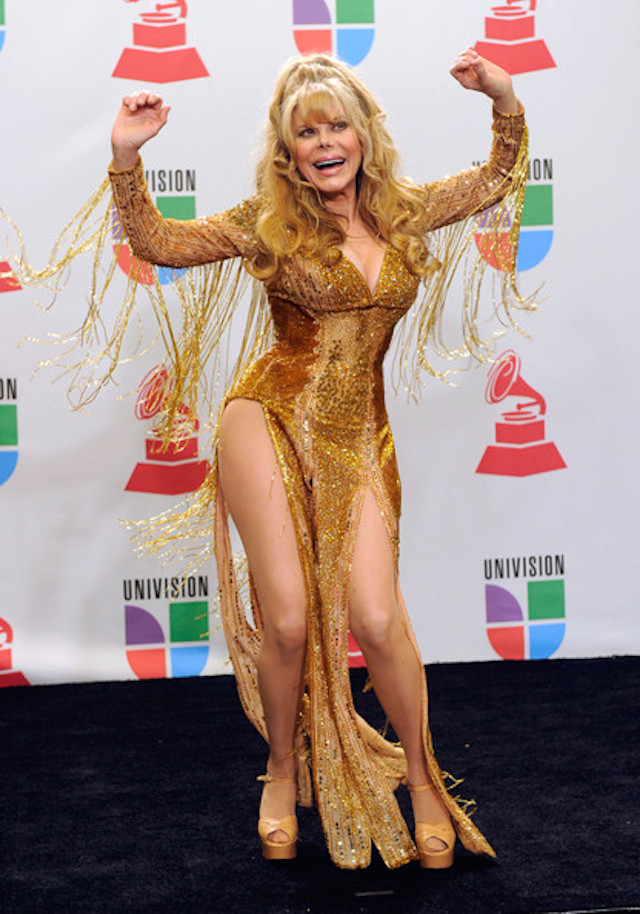