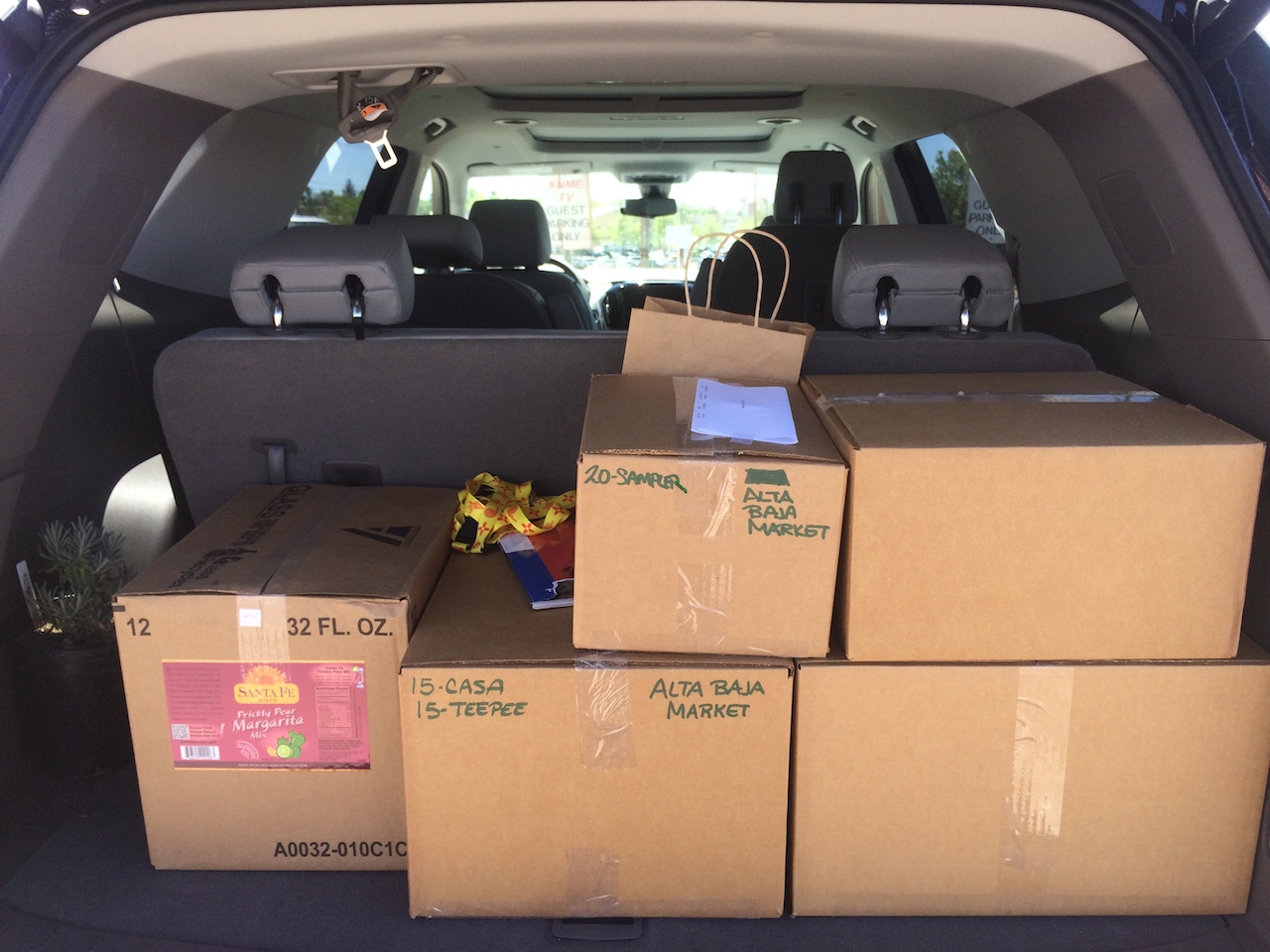 I get along well enough with my neighbors, but we really don’t talk. That’s why it was surprising to me when I got a knock on my door one night from the lady across the street.

She had never talked to me before, even though she and her family have lived in my hood for years. But now, la vecina was all smiles and excitement.

“So is that a Chevrolet Traverse in front of your house?” she asked. Why yes, it was!

Nope, it was a test drive.

“When you’re done with it, can you let me know what you thought?” she said. “Because I want to get one, but my husband wants to go with a Toyota.

Better conversation than her asking me to not play Los Bukis so loud, amirite?

I had requested a Traverse from my homegirl at General Motors because I needed a big SUV but nothing too big. I was headed to Albuquerque, to hang out with the homie Russell Contreras of the Associated Press, but also to pick up products for my wife’s store, Alta Baja Market in SanTana. I didn’t need a fancy paisa SUV like the Buick Enclave, or an elegant beast like my dad’s GMC Yukon; I needed a workingman’s SUV.

I needed the Traverse.

If Mexicans know any Chevy SUV, it’s the mighty Suburban, immortalized in song and film, and usually seen around Southern California with those stupid stickers that have stick figures of parents with like four kids and even a pinche dog. Traverse? I don’t think I had ever even noticed one, which means that Mexicans aren’t buying them much.

I took off around 4 in the morning and stopped only twice for gas by the time I hit ABQ.

But instead of my usual stops of Andy Devine Drive in God-Knows-Where, Arizona and Gallup, New Mexico (home to one of the busiest Wal-Marts in America, and it’s a trip—it seems every other customer is a teen from the rez in a death-metal T-shirt, I got my gas at Seligman, AZ and and Milan, NM. I immediately liked the Traverse for this—the gas mileage was markedly better than other SUVs I’ve driven.

On the mighty Interstate 40, it rumbled along peacefully. In the streets of ABQ, it zipped and zapped like a much smaller car (“Oh, a Traverse is just a Chevy pickup with a cab on it,” said another friend. Like hell it was). The sound system seemed better than other GMC cars I know, so I was able to listen to The Howard Stern Show nonstop. Hit ‘em with the Hein!

The more I drove the Traverse, the more it reminded of the GMC Acacia. It had the same feel, if not sleekness (no wood accents in the interiors, for one). And it was significantly cheaper, at a starting price point of about $30,000.

Chevrolet was right. In a recent commercial, they took couples that were on their first date and showed them the Chevrolet starter SUV family—the Trax, Equinox and the Traverse. It’s so much better than some rinky dink RAV4 or whatever the hell Toyota makes nowadays (I still stick to the Mexican credo that you buy Japanese cars and American SUVs and trucks)<!–nextpage–!>

Traverse problems? Minimal. GMC’s screen computers always seem to have some hiccup or other. The navigation system worked perfectly this time, but the weather didn’t, as evidenced by this photo: 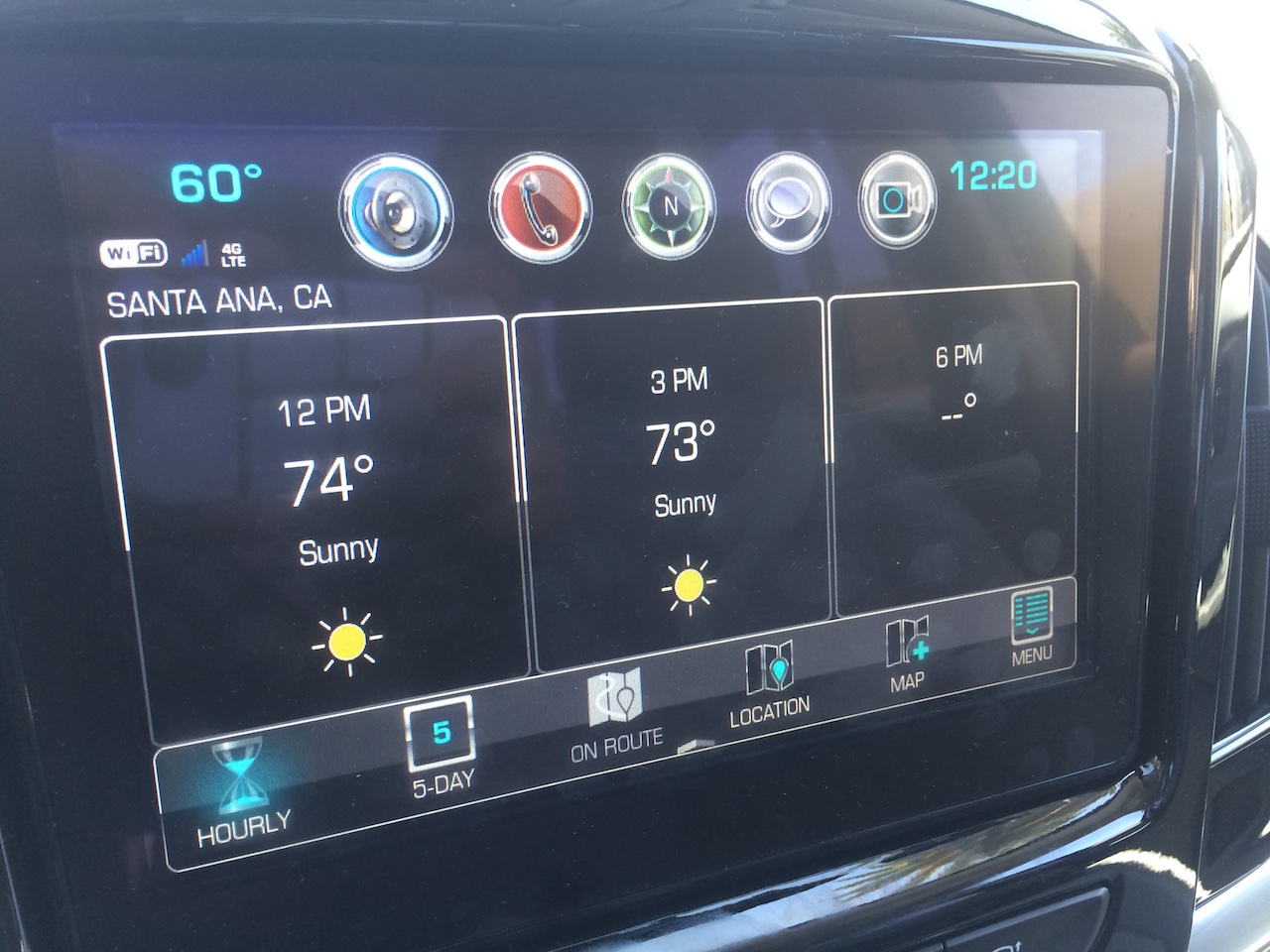 And it would every once in a while flash annoying reminders like this: 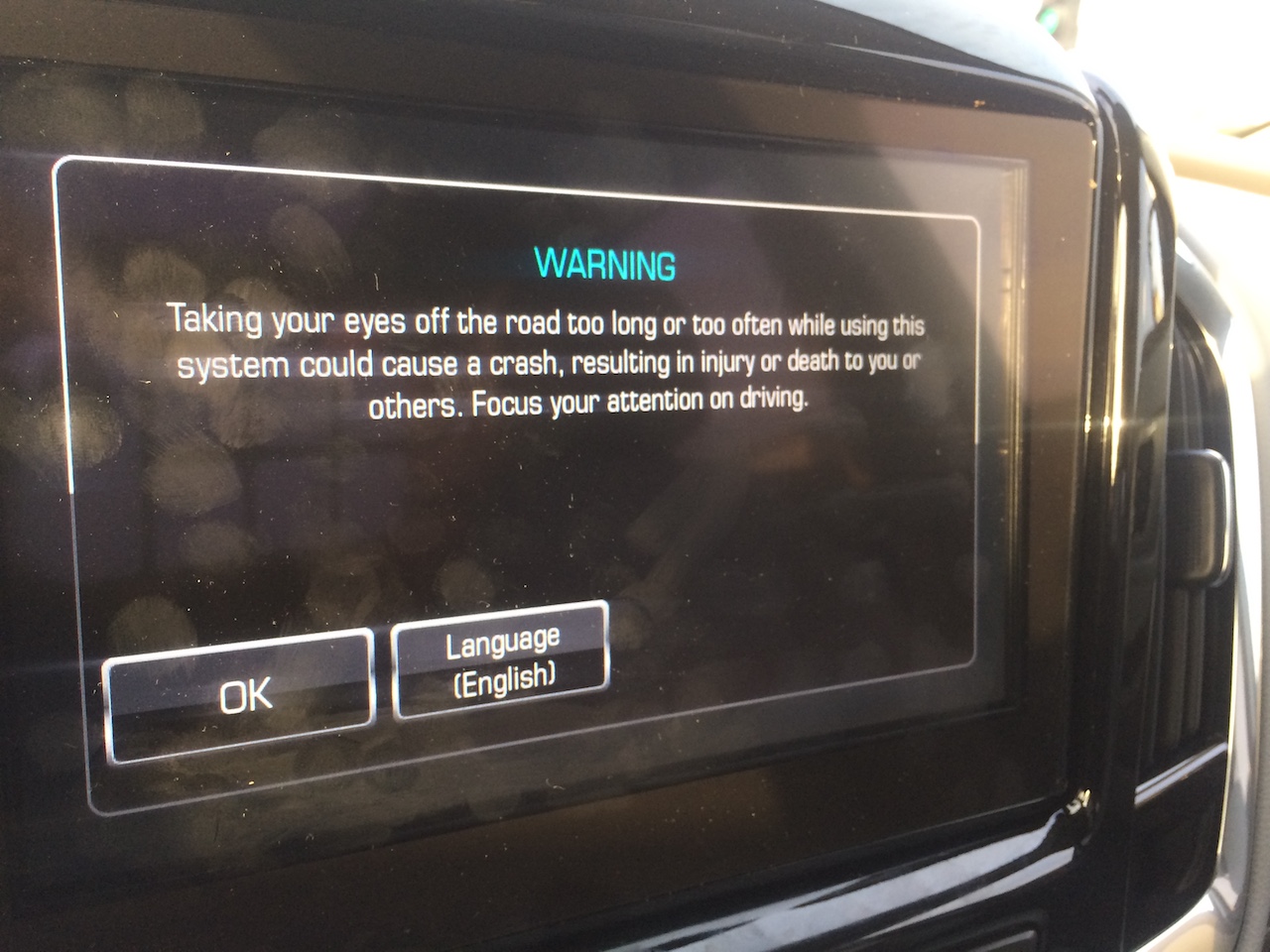 Then again, Chevrolet does it for a reason. On the very first morning I had the Traverse, a
cop in SanTana pulled me over because I was texting and driving. He noticed I had manufacturer’s plates, and didn’t think a Mexican could review cars for a living until I showed him the proper paperwork.

“The Traverse is a good one—my wife has one,” he said as he signed off on the ticket. “You should know better than to goof around with one.”

The Traverse had great sight lines from its windshield — no weird angle that cut off your peripheral vision, angled so that you’d get as much a view of the open road as possible (you know who has bad windshields? Honda. They’re like pinche blinders on a thoroughbred). The windshield allowed me beautiful views of New Mexico’s awesome vistas. And the engine was so quiet that I was able to put an Indian taco on the dashboard, and it didn’t slip AT ALL: 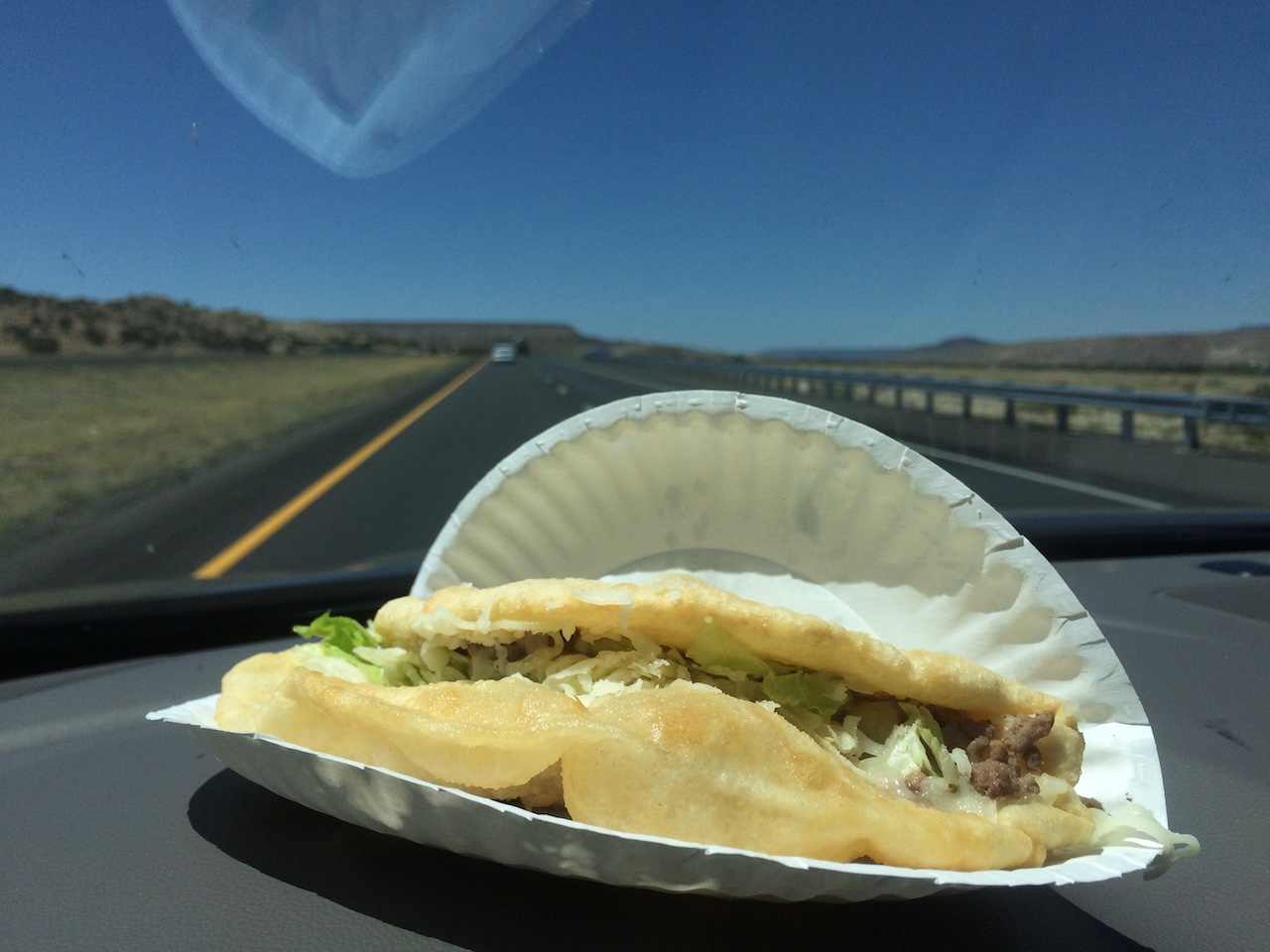 I only had the Traverse for a couple of days, and returned from the Land of Enchanment on Cinco de Mayo for my wife’s birthday. The following morning, my neighbor knocked on my door, and wanted to know what I thought about the SUV.

“It was wonderful,” I said. “It’ll be good for you, then your daughter can have it in a decade or so.”

A couple of weeks later, I saw a Traverse in their driveway. You owe me a commission, Chevrolet, or at least a ’59 Impala…HA! 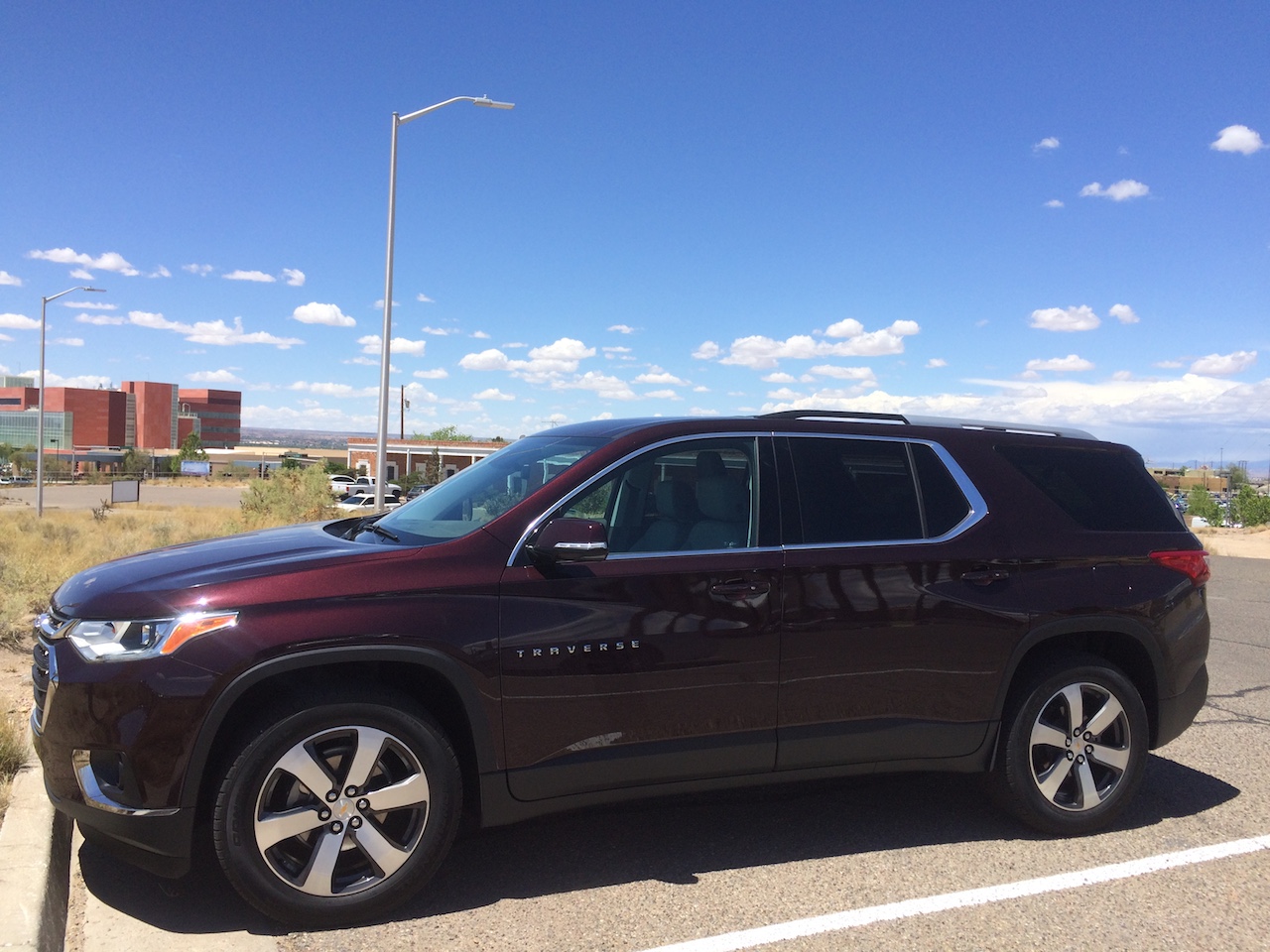