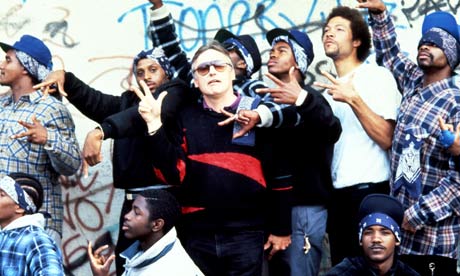 If you grew up in the 80’s and 90’s, you remember the film Colors. It spawned a lot of headlines about violence at movie theaters and the spread of Los Angeles-style gang wars. The Guardian Angels even protested the flick and left a toilet bowl outside of Sean Penn’s home as an “award.” They also strapped makeshift coffins to the roofs of their cars.

The film had this weird mystique. Colors introduced suburban kids (and their parents) to a whole new world – one they would spend the next decade imitating. Long gone were the fierce but safe dance-offs in Breakin’ 2: Electric Boogaloo – in Colors, Turbo and Ozone would have simply blown the heads off of Electro-Rock’s crew with a 12-gauge shotgun.

“Seventy thousand gang members. One million guns. Two cops.” said one of the taglines for the 1988 Dennis Hopper-directed film (photo, above.) If you do the math, that’s approximately 14 guns per gang member. How they ever carried that much weight is beyond me. Did the NRA support this film? My guess is no.

Everyone and her tia has an opinion about Colors. For me, it brings back memories of white boys in Colorado who wanted nothing more than to mimic what they saw on the screen. Colors, ushered in the wannabe era and then serenaded it with heavy doses of gangsta rap. [Extra credit: peep the video of Bangin’ In Little Rock.

I’ll never forget the sight of perfectly good White boys rocking bandannas and rat tails with colored beads in them and using Crip and Blood slang. Think: Courtney Gains, who plays Whitey in the film (photo, below) but more ridiculous. 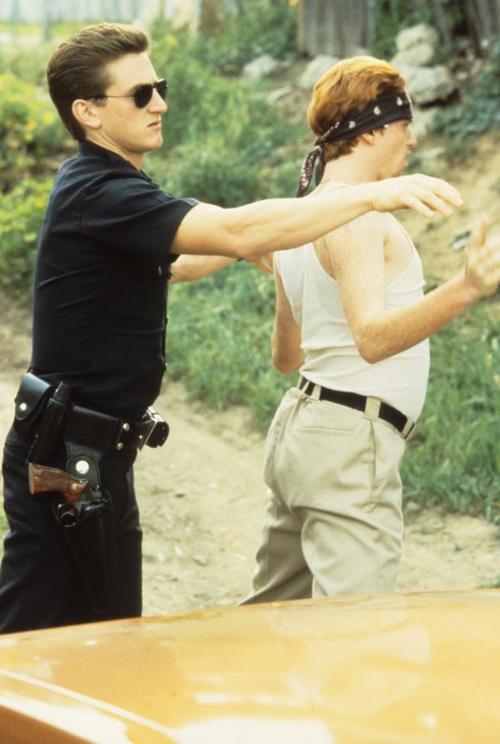 There’s a ton of things about this film that people don’t know about, which is why I’m writing this. One of the biggest things, which I only discovered recently, is that that there are two versions of the film.

If you buy the DVD, you will get the watered-down, cable TV version but if you’re an old man like me, and you happen to still own a VCR and a copy of  Colors, on V/H/S – well then, you’re in luck!

I had to really dig in my garage and do the “two-one” sign with my hands in order to find my copy. On the back of my V/H/S tape it says: “New Footage Added. Only On Video Cassette.”

Hmmm…what could they possibly have added to this film? Well, if you’re old enough to have watched the film in the theater like me, then there’s nothing new here. But if you’ve only ever seen the TV version, you’re definitely missing out!

For starters, the sex scene between Pac-Man (Sean Penn) and Luisa (Maria Conchita Alonso) is much, much longer. I’d be lying my ass off if I said I did not have a major crush on Alonso back in the day so this extended scene is a bonus, except for the fact that Penn is also in it. :/

Sadly, Alonso has delved into right wing politics since her days as a homegirl (she’s a regular on Sean Hannity’s show), and her sexiness factor has lost a few points but she will always be Luisa from the block to me.

“This is meeee too, mannn!” 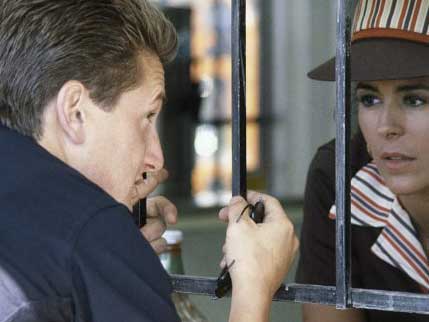 Turns out, just like in the film, Penn and Alonso hate each other. Alsono thinks Penn is a “communist asshole” for supporting Hugo Chavez and Penn called her a “pig” at LAX when she started yelling at him. As Roger Ebert pointed out in his review of the film, their romance was doomed from the start.

It’s also interesting to note that Alonso is Cuban, not Chicana. But silly things like that never stopped Hollywood before.

Penn, who is a method actor, was arrested during production of the film for punching an extra on set who was taking photos of him without permission. He served one month in jail for the assault as production of the film continued. However, there are no reports of Penn joining the Crips, the Bloods or 21st Street while incarcerated. Lucky them.

Another choice scene that was cut takes place at the beach, my guess is that it’s supposed to be Venice Beach but what do I know? It takes place right before Hodges and Pac-Man chase down and beat the living shit out of High Top (played by renowned actor Glenn Plummer).

In the scene, there’s a family getting beach stuff from their car who are hit up by a group of angry, shirtless vatos in hairnets, bandannas and sunglasses. After being asked where he’s from, the mullet and Hawaiian shirt-wearing father tells these dudes, “I don’t play that shit, all right?” They stab him in the back and run away while the guy’s wife screams her head off.

There’s a cut scene that takes place in the White Fence neighborhood when Pac-Man goes to pick up Luisa for another date. The homies hit up Pac-Man as soon as he gets out of his car and start fucking with him, just like he does them. One of them (the kid who got spray painted in the face Earl Scheib style) even keys his car and Pac-Man has to high tail it out of there before they pull a reverse Rodney King on his ass. It’s a great scene and one I particularly enjoy because Penn looks genuinely scared to be there.

In another cut scene, Hodges and Pac-Man shake down some Crips on the street who are in the middle of a drug deal. One of the Crips tries to swallow the crack he was selling and Pac-Man tries his damndest to make him choke to death on it while screaming at him. Again, this is an excellent scene and really illustrates why Pac-Man is such a hated figure. He’s a real dickhead and it foreshadows many things to come in L.A. from the cops.

Believe it or not, the original story was set in Chicago and had gang members selling cough syrup. Really! It was Hopper’s idea to change the location to Los Angeles and focus it on the gangs there – despite the fact that one Hollywood producer told him that there were no gangs in L.A.

I looked for the original At the Movies segment on the film because I thought that would be hilarious but I wasn’t able to find it. Apparently, Siskel & Ebert gave this movie “two thumbs up!” Ebert even uses the word “chicana.” Imagine that!

Aside from all of the cut scenes, there are so many famous people in this film it’s hard to keep track of all of them. One of the bigger stars to emerge from the film Colors is actor Don Cheadle, who is currently co-starring in the blockbuster Iron Man 3. In Colors, Cheadle (photo, below) plays Crip leader, Rocket, and just like any other person of color in Hollywood, he had to start off doing the Hollywood shuffle. 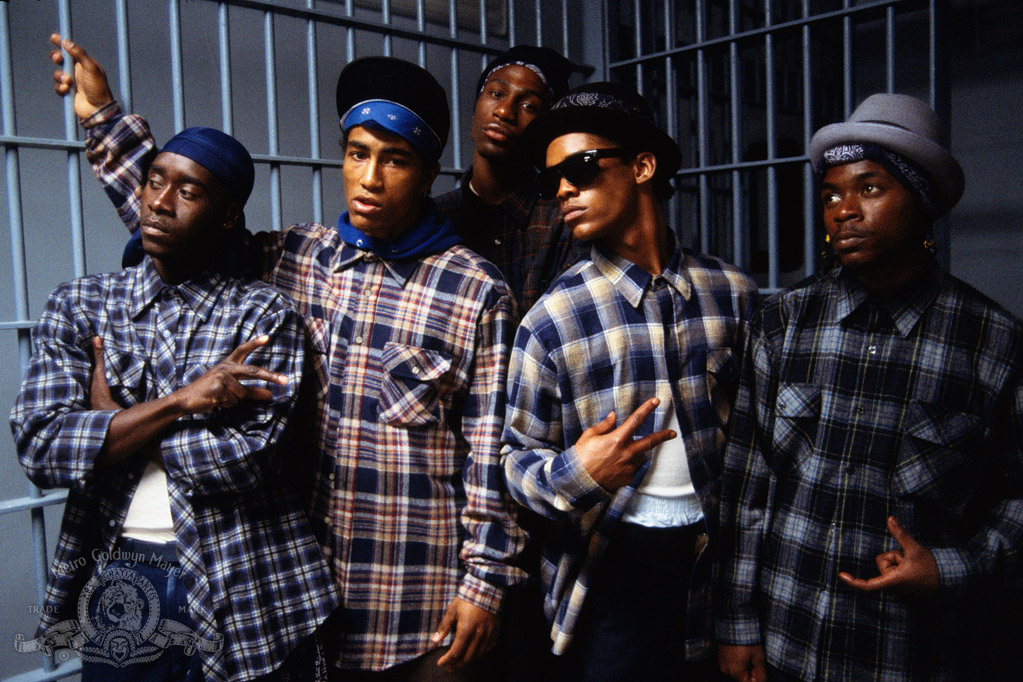 It’s important to note that Hopper used real gang members in Colors, and filmed everything (even interior scenes) on location and was proud of the authenticity of the film. There are conflicting reports about how and why the gang members were used during production. According to Hopper, 10 people were killed during filming.