Cheadle said in an interview that the gang members Hopper used were threatened by police with jail time if they did not participate in the film.

According to Gerald Ivory, a technical advisor for the film, after he filmed Pac-Man punching a man thought to be using children to deal drugs in the notorious Jordan Downs housing project, the neighborhood erupted into applause. I find that hard to believe given the history of police-hood relations in L.A. but then again, this is the L.A. Times reporting. 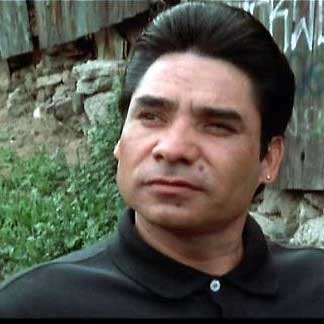 One of my favorite characters in the movie is Trinidad Silva (photo,) who plays Leo “Frog” Lopez. Silva died the same year Colors came out but what I didn’t know is that he died while shooting Weird Al Yankovic’s UHF.

Apparently he was in a car collision in Whittier and a drunk driver ended his career. UHF is dedicated to his memory.

Tony Todd (Candyman) plays an angry black man dissatisfied with the job the cops are doing. Personally, I think they should have used Todd in more scenes but he wasn’t widely known then. He’s a great actor.

Leon Robinson (The Five Heartbeats) plays a Crip named Killer Bee. He is featured in an explicit sex scene and shot to death while naked. People at IMDB and on YouTube really enjoy this sex scene for some reason.

Damon Wayans (In Living Color) plays (drum roll) a Crip named T-Bone. He also wears a diaper in one scene and humps a rabbit. How’s that for a casting couch?

Mario Lopez, who played Slater on Saved by the Bell, is also in Colors. He was 14 years old at the time. He plays a member of the 21st Sreet gang. Sadly, his friend Zach Morris did not survive getting jumped in. R.I.P.

Shakespearean-trained Grand L. Bush, who plays Looney Tunes in the film, had more than 40 theater, television and major motion picture credits under his belt when he did Colors! Bush helps parody the stereotypes that black and brown actors face in the film Hollywood Shuffle.

In addition to the full credits, there are some really funny comments about the film on the IMDB message boards (photo, below). One of my favorites was a guy asking for clarification about the words “Charlie” and “Simone” that are used in the film. 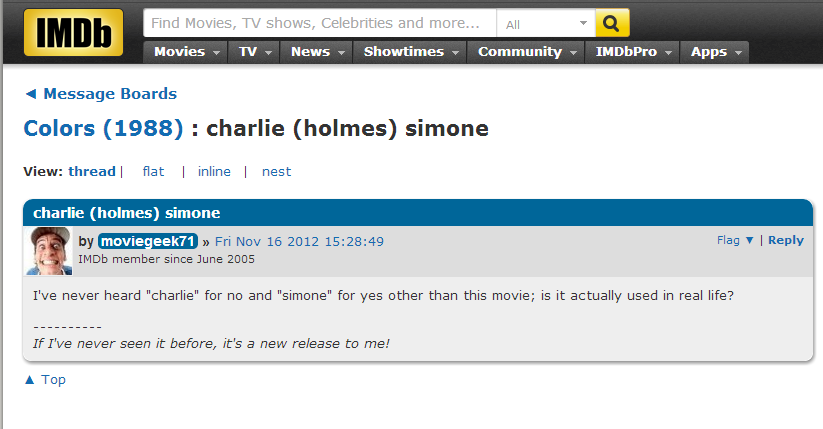 Colors came out 25 years ago and much has changed on the streets of Los Angeles and on the silver screen. At the same time, some things never change.

Say what you want, but it’s an important film and one that displays a change in attitude in Hollywood towards people of color. It wasn’t too long before Colors, came out that Hollywood was portraying us as break dancers and pesky neighborhood kids. Dennis Hopper changed all of that and things have never been the same.

As Hopper said in an interview, Hollywood was skittish about portraying drugs and gangs at the time, but as the box office records indicate, not to mention the slew of gang films that followed, Hollywood quickly changed their minds once the money started to roll in.

Never mind White Fence, Hollywood is still one of the biggest and oldest gangs around.

POCHO has no big backers, no mega investors, no brand-name “sponsors.” We get a trickle of revenue from Google Adsense (it barely pays my iPhone bill) and that’s all. No one owns us, no one tells us what we can or cannot do. But independence ain’t free. We’re hoping to raise some extra cash from you, our loyal readers. Can you help?