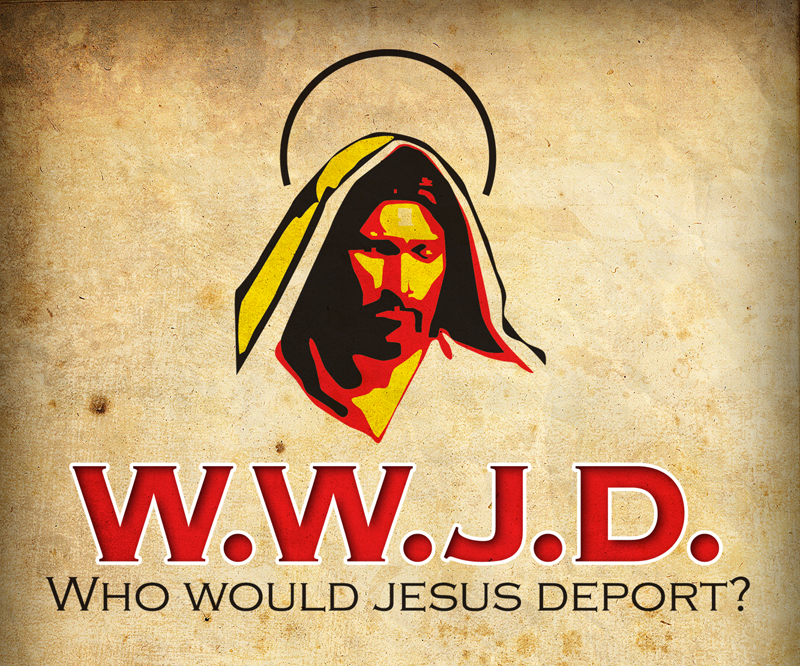 Don’t you just love being awakened at the crack of dawn on a Saturday morning with a knock on the door from your cheerful neighborhood congregation?

If you are from the southeast Los Angeles area that might have been me (dispensa for the madrugada). One thing I’ve learned is that faith, politics and culture are intrinsically woven together for many of us.

If the Jesus of the Bible were among us today, I would what He would think of the ‘MURICA! version of His teachings, and I’d like to ask Him a simple question, “Who would You deport”?

As a Pastor and a Xicano, my spiritual and social networks carry with them wide range of values and opinions. The current dialogue on immigration seems to present a clear opportunity to people of various faith backgrounds to simply “Practice what we preach.”

A baffling force has befallen many of my Bible-believing brothers and sisters. A nationalistic, egocentric attempt to “comb over” fundamental principles of our faith is at hand.

So I searched for the biggest, classiest, verse the Bible gives us that deals with dealing with immigration, and let me tell you, “it’s gonna be HUGE”!

In Exodus 23:9 we find a divine mandate that serves our current immigration crisis well.

Exodus 23:9
You must not oppress a foreign resident; you yourselves know how it feels to be a foreigner because you were foreigners in the land of Egypt. (HCSB)

The epic stories and struggles of all those who have had to uproot their families and homelands, in search for a new beginning date back as far as the book of Exodus. It recalls one of greatest tales of mass migration as a people who were bound in slavery for 400 years are freed from oppression.

With such a clear call to treat the immigrant with dignity and humanity, why then are Evangelical Christians overwhelming supporting candidates whose rallying cry has become mass deportation and building a wall as soon as possible?

Whether we identify as a “person of faith” or a “person of color,” it would seem clear that the immigration issue will continue to be a unifying force.

Who would Jesus deport?