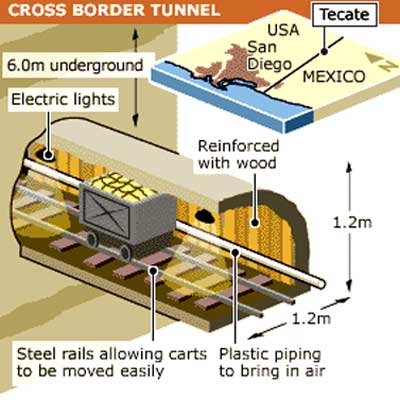 “The American Hyperloop does not even exist yet our system has been used for decades.” The Mexican subterranean high speed travel system, once known as the “narcotunnel,” will be rebranded and marketed as the “HyperLupe,” he said.

“We will compete with the gringos in the race for a super-fast system of delivering people and goods. In fact, we have already beaten them,” said Sagañez.

Sagañez says the calculations back him up:

Thirty minutes is a super speed, because if you have tried to cross the border in a car, it can take you four hours to move two miles. That is 1/2 a mile an hour. Do the math, pendejo!

Future plans include completing a HyperLupe system that reaches a major consumer center, either Hollywood or Beverly Hills.

“We need to continue building a new economic model here, insteading on relying solely on our traditional exports of guano and juato,” said Chamber of Commerce official Donalda Crump.