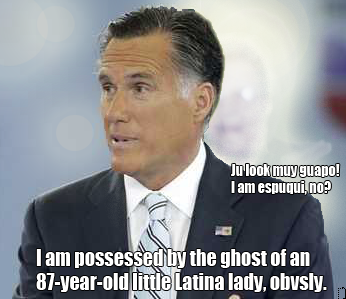 Some people think the Republican Party has gone crazy; others just think they are severely out of touch.

Both of these assumption are wrong.

The GOP has been possessed by the spirit of my dear late Abuela Elisa to spite me for being such a malcriada. If you don’t believe en los espiritos, explain this:

The GOP wants to outlaw abortion and birth control. So did my Abuelita! After all, how can you force a man to marry you if he can’t get you pregnant? Women today are forced to “put out”” with no hope of marriage in return.

And with no hope of marriage, how will a woman support herself!? Work? For equal pay? Pssh, que chusmeria!

The GOP does not believe los gays should get marriage equality. Big shocker, neither did my Abuelita. They should be forced to enter a loveless arranged marriage with their twice-removed cousin Umberto just like everyone else.

The GOP wants to redefine rape. So did my Abuelita! As a little girl, I asked her what rape is and she told me, “it’s what happens to girl who go out alone.”

But don’t worry! If you’re the victim of a legitimate rape you can still get married off — just not in a white wedding dress. Sorry.

The GOP thinks 47% of the country is moochers who need to pay taxes. My Abuelita– well, actually, my Abuelita didn’t pay taxes. She had no income (because women shouldn’t work outside the home) and she collected Social Security.

That means… She was a moocher! An immigrant, non-English speaking moocher! Seriously, Abuela, major flojera.

Hm, maybe the GOP is not possessed by an uppity vieja, maybe they are just estuck in the old country…