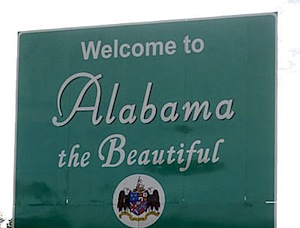 I knew that I was in a heap of trouble when the mechanics showed up in a big old beat-up four-wheel-drive mud-covered truck with a hand-painted sign on the doors that read Cooter’s Roadside Auto Repair.

These fellas sat in their truck a little too long — staring at me — before they got out to reveal they were dressed in camouflage hunting outfits from head to toe. Their caps were camo as well, except for the Confederate flag emblem on the front. Their clothes were covered in dirt, grease, and what looked like blood stains, the same stains they had on their faces.

I was on my way back to Austin, TX from the East Coast. I had gone to do some remodeling work on my rich sister’s vacation home on Chesapeake Bay and was happy to be coming home with a little extra cash, around three grand, in my pocket.

Then, as luck would have it, or as my dad would say, all the good shit just turned to crap.

My little white Chevy work truck broke down in the middle of backwoods Alabama somewhere between Montgomery and Mobile.

It was the first time I had passed thru this state having driven the northern route on my way up to the East Coast.

I had been on the road for about ten hours and it was about two in the afternoon when my truck decided to quit on me. I coasted to a stop on the shoulder of the highway. I got out and looked underneath toward the rear axle, where the loud banging noise had been coming from. It was a badly damaged driveshaft from failure to replace worn out U-joints. I knew enough to fix it, but I only had my carpenter and not my mechanic tools with me.

I would also need new U-joints and a new or used driveshaft to get the truck back on the road. I was a only about a mile away from a small town so I pulled out my phone, got on the Internet, and found the number to the nearest and only auto parts store there. I called them to see if they had the parts. They had the U-joints but not the driveshaft, so I asked them if they could recommend a good roadside mechanic in the area.

The phone number they gave me was for Cooter’s Roadside Service. The woman that answered when I called sounded like a sweet Southern lady and she told me that she would send her husband out to assist me right away. It took them about an hour or so to get there after I made the call and another ten minutes to get out of their truck.

They were standing in front of me looking like Boss Hogg from the Dukes of Hazard and his deputy. To break the uncomfortable silence and to confirm my own diagnosis of my truck’s problem I asked the mechanics to take a look at it.

Cooter, the Boss Hogg look alike, with a humongous beer belly had a little trouble getting down on the ground to take a look underneath and even more trouble getting back up. He spoke up very slowly displaying a few dark brown snuff stained teeth. “That looks bad, that drive shaft is fucked up and it’s gonna take a few days and a whole lotta dough to get that fixed,” he said.

“Yeaup, yeaup, yeaup, it looks real bad, real bad,” echoed his partner, the tall skinny meth-head-looking one with the long greasy mullet dangling from the back of his dirty gimme cap. He had crawled all the way under the truck and popped right back up faster than greased lightning. He looked me up and down from head to toe and as he shook his head in agreement. I could’ve sworn that at that precise moment I heard the faint sound of banjos in the background.

“Do have an idea how long it will take and how much it’s going to cost me to get it fixed? I asked nervously trying to lose my Tex-Mex accent, remembering that Alabama had recently passed anti-immigrant legislation that was even more severe than Arizona’s.

Not that I’m an undocumented immigrant, although I could possibly be mistaken for one. I have migrated within the U.S quite a bit. I was born in Texas, the good ole U.S.A, so were my parents, and my grandparents too. When my great great grandparents were born, Texas was still part of Mexico. My Tejano pride deflated instanly when Cooter spoke back up.

“Hell, that driveshaft is gonna be to hard to find. I’ll probably have to go get a new one from a dealer in Mobile,” he said scratching his balls like he there was no tomorrow.

“You’re lookin’ at two or three days, maybe more. It ain’t gonna be cheap, I’ll tell you dat much. Tell you what I’ll do, little buddy, I’ll tow it back to my place and get it fixed as soon as I get the part. We live back dare about 20 miles off the highway. We got plenty room in my mobile home for you to stay, Junior here will share his room with you, won’t you Junior?” asked Cooter while he pulled a pinch of snuff from the round tin with the same greasy hand he had been scratching his balls with and put the brown wad in between his cheek and gum.

Junior smiled and revealed his own set of brown stained and very pointy teeth as he continued to shake his head up and down like a bobble head doll. My question about the cost and time of the repair was not directly answered and I was none too pleased with his suggestion.

Now both mechanics were staring at me waiting for a response and I had to think of something quick.

My thinking was interrupted by Junior’s whispering to Cooter something that to me sounded like “He sure is a purdy little Messcin.” The faint sound of banjos suddenly exploded in my head, it got so fast and intense I almost passed out. It was do or die time, I knew I had to come up with my best survival response immediately.

“Well, I certainly appreciate the offer fellas, but that just ain’t gonna work for me, I have to get back to Texas by no later than tomorrow morning cause I gotta report to my probation officer. I guess I will have to get someone from back home to drive out here and tow me back,” I said wondering to myself why I was starting to talk like them, scratching my own balls, and making shit up to make it sound like I just got out of prison.

The mechanics continued to stand there staring at me with a look that I couldn’t quite comprehend. Suddenly it dawned on me that they were expecting to get paid for having driven out to the highway where I was stranded.

I decided that it would only be fare to at least pay them for the gas they used up to drive out. I did not want to pull out the wad of cash I had in my pocket. So I fished out a couple of bills from the bundle knowing that I had put the smaller ones on the outside. I quickly noticed that they were one dollar bills. I knew it was not enough, especially since both men were now looking at the measly dollar bills like I was holding a piece of dog shit it my hands. I pulled one more bill out of the same pocket and thank goodness it was a twenty. I handed the money to Cooter, who and said, “thanks for driving out here fellas. Let me at least pay for your gas.”

A moment of deadly silence followed what I thought was my generous offer.

“We charge a $100 for our roadside service calls,” responded Cooter, with a scowl on his face as he reluctantly took the $22 in his oily hands. ‘Yup a hundred bucks,” said Junior still shaking his head up and down so fast I wanted to reach over and slap the back of his head.

“Aw man, I’m really sorry fellas but that’s all I can spare right now, I still gotta figure out how I’m going to get my ass and my truck back home, but I really, really do appreciate ya’ll,” I said still trying to sound like a good ole boy but instantly regretted that I had just drawn more attention to my little ass.

The camouflaged mechanics stared at me for a few more seconds than they should have and then looked at each other with dumbfounded and disappointed looks on their faces. They slowly got back into their big truck and drove off without saying thank you or goodbye. How rude I thought, as I let out a big sigh of relief. I watched them disappear into the distance and the banjo music faded with them.

I was still in the same situation except with $22 less in my pocket but very thankful that the sun was still shining and I had literally saved my own ass, at least for the time being.

Something on your mind? Tell POCHO all about it using our handy SUBMIT link.