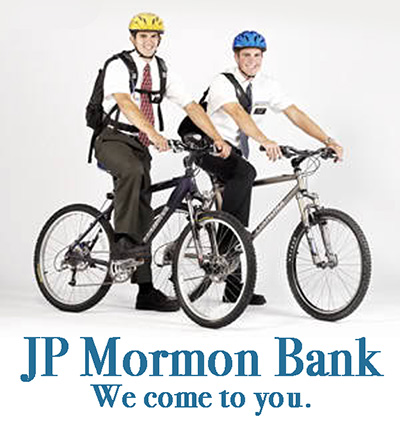 Instead of wailing about this so-called “Wall Street reform” nonsense, I have decided to open my own bank and mega Wall Street trading firm: JP Mormon.

At JP Mormon, we promise to keep your money away from the risky trades of Wall Street and in safe, secure island strongholds.

JP Mormon will actively pursue extremely safe and conservative trades in high risk derivatives and other financial instruments that even I don’t understand and have yet to be invented.

JP Mormon will invest your money in the burgeoning car elevator technology field, dog travel systems, and the highly profitable Overseas Job Outsourcing industry.  We will assist our top 1% of customers with excellent tax plans that will one day get their tax rates to 1% levels. The cutting edge, yet sensible approach of JP Mormon will help usher back the financially exciting era that our great country first experienced during the George W. Bush presidency.

Every JP Mormon customer service representative will be dressed in an appropriate conservative attire consisting of short white sleeved shirts with plain ties and safety helmets for their company vehicles. In fact, they will come to you, endlessly ringing your doorbell and handing out JP Mormon literature. Each JP Mormon banking center will be ornate and beautifully appointed, although customers will be encouraged to only use the ATMs outside, unless they are fully vetted to enter the “banktuary.”

There will be no free coffee in the lobby, don’t even ask.

And JP Mormon can guarantee you this: We will give you a free toaster with every new account that you open, or for every $2 billion of yours that we lose.

On behalf of JP Mormon, I’m Mitt Romney, and I approve this message.